9th June, World Cup Fever and the Weather in Phuket

ENGLAND! ENGLAND! Get your cross of St. George out and wave it mightily..And did those feet in ancient times...Bring me my chariot of fire...

Although yesterday was mostly sunny, I did mention some spitting rain. Later on dark blck clouds hung over the hills. The rain missed our house, but on the photo below you can see the rain clouds dumping their load nearby. This kind of rain is quite common - very localised, and all over in half an hour. 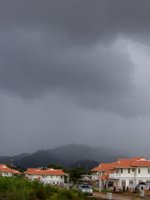 This morning was bright, crisp and clear. B.E.A Utiful. Photo below shows Radar Hill as seen from Kathu. I parked my bike in a field by the side of the road and took a walk for a few minutes. There is a lot of open land in Kathu between the Jungle Bungy Jump and Tesco Lotus, though this area is being rapidly developed. 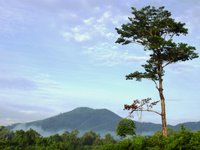 The Germans invented the word Schadenfreude. I will be cheering for Los Ticos tonight!