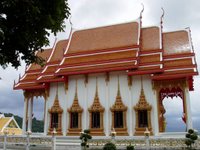 Sunday, as is often the case, did not live up to it's name. Rather grey all day, with dark clouds around that somehow never reached us. We lunched at Laem Hin Seafood, having first visited Wat Sapam, a temple I had not been to before, with views over Sapam Bay, Laem Hin and over to Koh Maphrao. Very nice place, well worth a stop. At Laem Hin, the restaurant was very busy. It's a popular spot with locals, and there were a couple of "local foreigners" there too. Every time I eat there, I feel like my belly has been satisfied. Always full, but not stuffed or bloated. It's good to eat food like this - seafood, salads etc.. The Yam Gung Seab (Dried shrimp salad) is my favourite.

Places to eat in Phuket

Monday was a very wet day indeed. Started wet in the morning, looked like it was getting brighter, but then the rain came again in the afternoon and pretty much carried on all night, with some blustery winds too.

World Cup - highlights of the last few days...Italy vs. USA, 3 red cards and Italy held to a draw (when after the first game people were saying they looked good). Ghana beat the Czechs, so maybe we'll get one African team in the last 16. Again, the Czechs were great in the first game. Better to start slowly like England...I think they have to prove something against Sweden tonight, even though they are alrady in the second round...France were rubbish again, but at least scored a goal! Park scored for South Korea - another UK based player.

The Ozzies were put in their place by Brazil, though Oz can still get in the next stage by beating Croatia, who have yet to score a goal.

Last night Ukraine, who lost 4-0 in the first game, beat Saudi Arabia 4-0. Last world cup I recall Germany beat the Saudis 8-0. Room for improvement for them.

Not really any surprises yet. In the last 16 already are Argentina, Brazil, Germany, England, Spain, Ecuador, Holland, Portugal..would be nice to see an outsider like Trinidad or Ghana make it through, or maybe South Korea (adieu France).

England v Sweden tonight, but at 2am Thai time...Not worth staying up for. Good luck lads.