There are signs that the weather is on the mend. It's that time of year when all of a sudden you wake up one morning and think "That's it. It's high season". We are still having some rain. Yesterday was dry most of the time. We had a nice big lunch at BBQ Hut in Patong (not recommended for vegans). Sun was shining for a while and the winds have dropped.

This morning started fresh, but it's now 9am and raining again. The forecast on Wind Guru predicts a relatively dry weekend but could be a very wet and windy start to next week. Maybe the final sting in the tail, the last crack of the whip, the start of high season?

And what of the coup? Oh, you forgot? Well, nothing new to report here. The interim PM was appointed - Surayad Chulanont, who promises to tackle political divisions and end the Islamic insurgency in the country's south (hopefully with a bit more tact than Thaksin). Meanwhile, here's a photo of coup leader General Sonthi enjoying a game of footie. Does he play on the left wing or right wing? 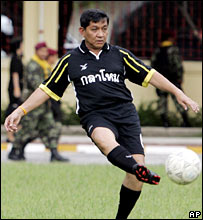