Having been out diving on Wednesday (a rather grey day, but still nice dives), the weather continued rather wet in Phuket on Thursday. Friday was almost dry, but there were sizeable waves at the beaches, leading to the "red flags" being flown to warn people not to swim (see Phuket Gazette).

The stronger wind from the South West is a sign that the low season is here. While this wind brings more rain than average, it's not the rain that makes the season low, but the wind creating waves and swells that make beaches unswimmable sometimes and boat rides bouncy! The conditions are normally worst right at the start and end of the low season. In the summer - June, July, August - the weather in Phuket can be very nice much of the time.

Anyway, after 5 days of rather bad weather, this weekend has been hot and sunny. My daughter (5 years old) said she hoped it would rain today, as it was too hot yesterday! We've been able to get out in the sun and enjoy this lull - the forecast is for more cr*ppy weather in the middle of next week. We had a nice lunch at Kan Eang Seafood today while the kids played on the beach. 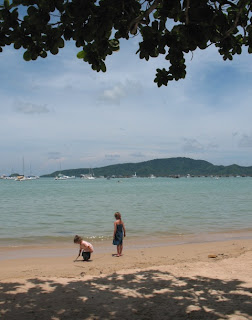