Getting Better All The Time

After the cold rain of Thursday evening, the weather in Phuket has gotten better over the last few days. Friday still saw some dark clouds, but turned into a nice afternoon, which was just as well since we had a little BBQ at our house. On Saturday, after a looooong lie in (thanks kids for quietly watching TV and not waking dad up) I suggested we drive up Buddha Mountain where the big Buddha is being built, and is nearing completion. Just as the words left my lips, the skies over the hills darkened, the wind picked up and the rain lashed down for about 20 minutes. So we first went for lunch at Leelawadee.

An hour later and things were sunny again. The dirt road up to the big Buddha is being surfaced now, so was decent to drive on despite the rain. From up there, the views are great and when (when?) the Buddha is finally complete it will be amazing, that's for sure. 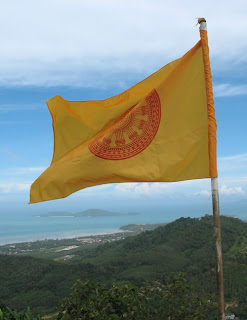 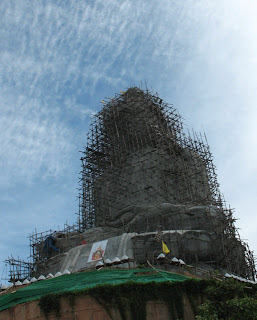 Over the last 2 days, the wind has died down, the seas are calm again, though there have still been some quick showers. This week looks like it's going to be a good one. Man, I was mean but I'm changing my scene and I'm doing the best that I can.

Getting Better All The Time  |  The Phuket Weather Blog