Mostly cloudy, but at least we're not in Clapham!

The weather in Phuket has been a bit grey for the last few days, with a couple of really brief but wild rain showers. A little windy at times, although at Sunrise Divers we've had divers out every day and I didn't see anyone coming back looking green, so I guess the waves were not too bad! It's just been a bit grey, that's all. A few nights ago the wind suddenly picked up and I could see very dark skies over the hills to the west of our house. As rain started to fall, I raced around outside shutting windows. Rain battered the house for all of 5 minutes and it was all over. We had another quick storm today as we ate some food in Tesco Lotus. Again, it lasted just a few minutes.

Meanwhile... in England you better start making friends with Noah. Floods have caused deaths, a hailstorm hit London ... in JULY. You know that movie called "The Day After Tomorrow"? 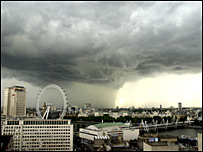 So, is the climate changing or are we just paying more attention to it? Are WE to blame? Would things be any different if we all rode bicycles to work and used solar power? Live Pop concerts are happening today to raise awareness of climate change - it's called Live Earth.

Today was mostly grey. Started sunny, we had that freak storm around 11am, then the rest of the day was mostly cloudy. We took a little walk at Kathu Waterfall to stretch our legs. There was not much water falling. The waterfall is a bit crap to be honest, even at the best of times, and the facilities were old and worn out 7 years ago. Still, you can take a sweaty walk in the jungle and see tropical plants, and there is no entry fee. After this we stopped at the Cable Ski, which is on the road to the waterfall. My 2 year old son was impressed - every skier got an "oooh, wow!". 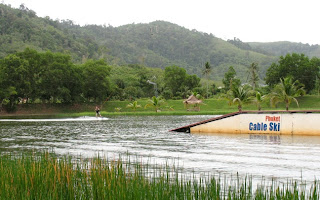 Mostly cloudy, but at least we're not in Clapham!  |  The Phuket Weather Blog