Well, not here... Last night there were 2 large earthquakes in Southern Sumatra, the first 8.4 on the Richter Scale, followed by a bunch of aftershocks and then a seperate large 7.8 quake further south. The Indonesian government issued Ts*nami warnings, but none occurred. The quakes are along the same fault line that triggered the Boxing Day quake in 2004. Ever since that day, everyone in this part of the world gets a bit nervous at earthquakes. The quakes yesterday were not felt here in Phuket and no ts*nami warning was issued here; nevertheless, people did head for higher ground - see report in the Phuket Gazette.

You can check for large quakes on the USGS Website.

Meanwhile, the Nation newspaper had reports of flood warnings being issued for Phuket, Krabi, Phang Nga and Ranong. As I write this, it's quite sunny outside, though there is a breeze blowing and the sea looked a bit agitated this morning. Yesterday was all sunshine and showers, no heavy rain here in Karon Beach. Weather is normally unsettled at this time of year. I'll just dash down the beach and take a photo... hmm, a bit rough. Don't ignore the red flags, folks. 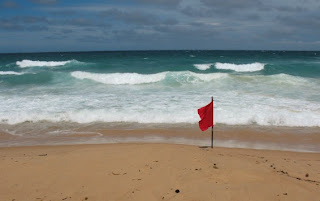