The Sky Outside is Wet and Grey

I was going to write about yesterday being probably the wettest day of the year, but I think maybe today has now taken the honours. It seems like it's been raining pretty much non stop since Friday afternoon. It was very wet Friday evening. My wife had to come pick me up in the car. Riding the bike home in the rain did not seem appealing. The forecasts that I read on Windguru were correct - wet, wet and more wet. The forecast continues wet and windy for the next week. Still, no point sitting around moping. You have to expect a week of cr*p weather at the end of the low season. Happens every year. This year is a couple of weeks earlier than normal, which should mean "high season" will start early...

Yesterday I was not working. Not ideal weather, so we did the usual wet-weather thing and headed for the Central Festival mall to eat and see what the weather decided to do. On the way, I decided to nip up to Bang Wad Reservoir to see how all this rain has affected the water level. Nice and full! Hopefully no problems with water supply this year. Whilst we were there we drove around the reservoir, telling the kids to keep an eye out for tigers and snakes. The wind was strong. I got out of the car to take a photo and with the rain hitting my face and the wind in my hair, why it was like being in the Yorkshire Dales! 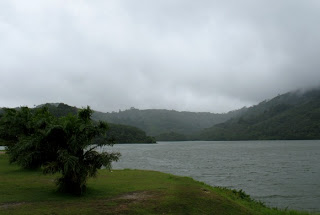 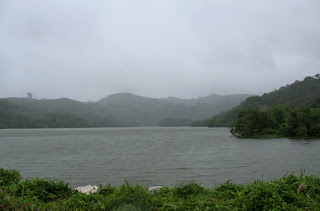 After eating at Central (the food court upstairs is good for cheap eats), the rain was still falling, but I hate sitting around, so I thought we'd take a drive down south to Phromthep Cape and Rawai beach. Still a bit wet, but there were patches of bright sky. I noticed that all the little restuarants have now gone from Rawai. It looks much neater, but on the other hand, those little beachside restaurants were very popular - see photos on my Rawai Beach page.

At Phromthep Cape we had gusty winds and even a few rays of sun. The coast around Phromthep and Naiharn is great. We took a side turn to where the wind turbines are between Naiharn and Phromthep - the trees here are bent over by years of westerly winds: 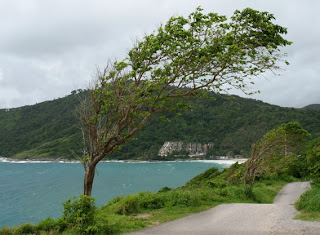 Looking back the other way you can see Ya Nui beach in the foreground: 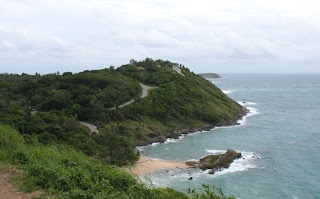 My wife and daughter enjoyed standing in the wind with their long hair blowing around like wild flames. See, you can have a nice drive around and a nice day even on the second wettest day of the year! Today wins that award.

The Sky Outside is Wet and Grey  |  The Phuket Weather Blog