It really does look like the high season weather is here. The Windguru forecast has no strong westerlies for the next week, the rain has gone, skies are blue, it's darn hot... So October could be a very good bet for a last minute trip to Phuket - check Agoda for hotel deals - October is still "low season" for hotel prices, so you can get great deals AND great weather!

Yesterday was one of these TOO hot days. OK, I imagine tourists flocking to the beach to get burned, but we "locals" were like "it's too hot to go out". We managed a lunch at a nearby restaurant, but then everyone felt sleepy in the afternoon heat. Later in the afternoon, I headed to Phuket Town for a walk around the streets near Jui Tui shrine, one of the main shrines in the vegetarian festival. The street past the old market (which is being redeveloped) is packed with food stalls during the festival.

Today - also very hot, but we have spent most of the day at Paradise Beach, just around the corner from Patong, but very different! 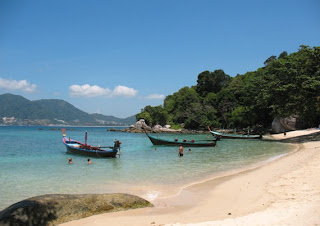 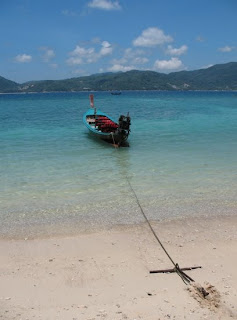 Later we took a walk at Bang Wad reservoir. My 7 year old daughter seems to have the beating of me in a foot race.. guess I need to lose some weight! Tomorrow the alarm is set for 5am. I am meeting a friend and heading to Kathu Village nice and early for the vegetarian parade from Kathu to Phuket Town. There have been processions for the last 5 days, but somehow I have been far too lazy.. Tomorrow is the day for some photos of swords in cheeks! Looks like the weather will be perfect for it.