Clean beaches and sun in Phuket

Where is the rain? Where? This is the kind of weather that you expect in high season. The winds have died down this week, small waves now at the beaches, I don't seem to remember any rain. We're into July now. Will it be as rain-free as June? Yeh, we had a few wet days in the middle, a few quick evening downpours, but June is meant to be one of the wetter months in Phuket.

These figures from Phuket.net.. but there is no indication what data is being used to get these averages, where the rainfall is being measured, how many and what years this is an average of...

I have just been in touch with a guy who has been recording rainfall at his house in Patong since 1998. He sent the data from this year. June had just 50mm of rain in 2009, most of which fell on one day! Also clear that March 2009 (184mm) was quite a bit wetter than normal. Hopefully he'll send 11 years worth of Phuket rainfall data soon.

This morning I headed to Karon Beach, outside the Hilton, at 10am. I had been advised a beach clean up was happenning, and was keen to help. Did not see any beach clean up but the beach looked clean anyway. I drove further along the beach to the Moevenpick hotel. I had been told something would be going on there too. Sure enough some hotel staff were carrying some rubbish off the beach, but were all finished at 10:30am. So I just took a few pictures of local guys doing some fishing. 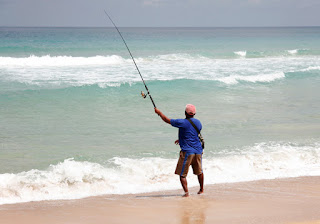 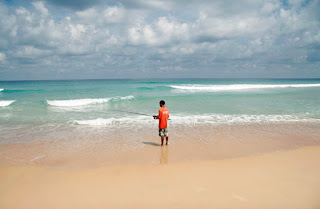 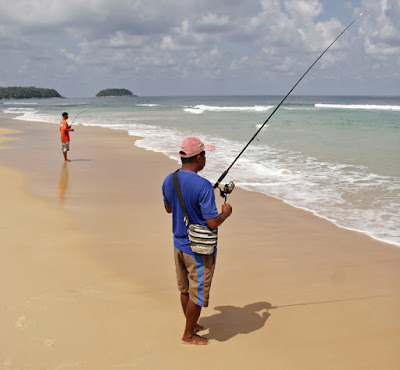 Clean beaches and sun in Phuket  |  The Phuket Weather Blog