Finally a bit of rain!

After the dryest June since at least 1998, we have had a bit of wet weather this week to start July. I can say with authority that June was the dryest for 11 years as I have been sent 11 years worth of daily rainfall data by a resident of Patong. I have been analysing the data and will post some of the averages soon.

Monday was cloudy but I saw no rain, but you could feel it coming. Tuesday started dry, dark clouds closed in, but there was little in the way of wind. Then in the late morning the rain lashed down for a couple of hours. Really lashed down, heaviest rain for a long long time. And wouldn't you know it, the rain did for our elecric supply. Something shorted somewhere and we didn't get power back until 4pm. I was not silly enough to head out in the rain to take photos, but someone at the Phuket Wan website did! Looks like the rain was worse in Patong. 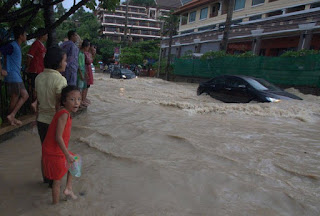 After all that, I spoke to a customer who had been out diving at Shark Point and the King Cruiser Wreck, some 20km east of Phuket. They had no rain at all! These heavy showers can be quite isolated.

Today started off with clear blue skies, a lovely morning. There was some rain in the afternoon, but did not last long. I paid a visit to Wat Sam Kong, the local temple of the Sam Kong area in the Northwest of Phuket Town. It's maybe 3km from our house and I have never stopped there! There's a big Phuket Temples section on Jamie's Phuket :) 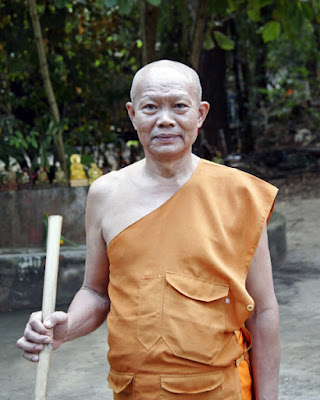 And there was still time for a swim with the kids in the local pool. My 7 year old daughter has been having swimming lessons for a couple of weeks and has been transformed from a splashing octopus into a mermaid. She is fairly zipping across the pool now. Proud dad moment, do excuse me.

Finally a bit of rain!  |  The Phuket Weather Blog