Almost perfect.. taking into account that this is supposed to be the low/rainy/monsoon season. I would hope that if you have followed this blog or checked out the archive links to previous months (going back to 2006) you might begin to realise that the low season (now renamed the 'SUMMER SEASON') is not too bad, indeed sometimes it's great. There are no half truths here on the weather blog.

I do reckon we are just about in for a change again, though. All week has been pretty sunny, light winds continuing.. sometimes even blowing from the east, which is backwards for this time of year. Should be westerly/southwesterly winds. On Wednesday, I took a day off from work to allow some extra family time. I had already seen the Windguru forecast which predicted a wetter day, and indeed I recommended to some diving customers to dive Thursday rather than Wednesday... There was some rain Tuesday evening, you could see a band of rain coming from the east on the Phuket weather radar. But it only lasted a couple of hours and was not heavy. Same happened on Wednesday afternoon, rain coming from the east. But again, nothing heavy. From the east? What happened here?!

Thursday and Friday - more sunshine, light winds, great diving conditions, great for anything really! Except sailing or surfing perhaps. There is another surf contest coming up in early September at Kata beach, and it does seem to me that they tend to get rather flat seas at that time of year. Check my weather report from about the same time of year in 2007 - surfers trying to catch a wave.. with no waves!

Today (Saturday) - mostly decent weather, but lots of small isolated rain showers. We had a relaxing day.. rather odd weather. We half planned some time at the beach, but from our house we saw lots of dark clouds around, looked like rain.. so we headed for a late breakfast at Leelawadee. During the 45 minutes we were in the restaurant, the skies all cleared up. Blue with a few fluffy, friendly clouds... so we took a trip up to the Big Buddha.

I had a little camera play before we left - photos of reflections in the wing mirror of da pick up truck (nicknamed Optimus Prime)... 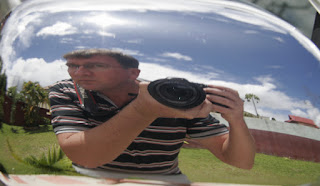 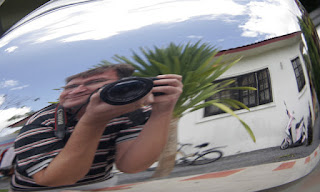 Up on the Mountain we had sunshine, while from the high viewpoint we could see localised showers moving across the landscape... 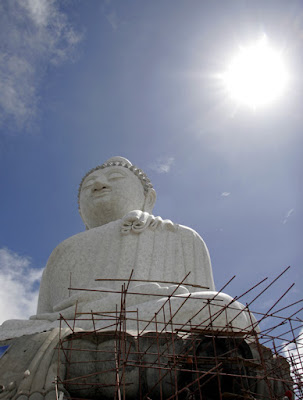 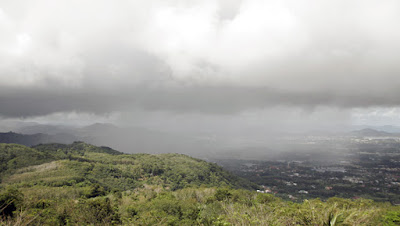 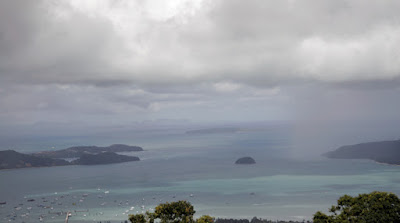 The winds were not strong today, but certainly blowing from the west again, so last weeks light east winds are over. Windguru does not predict any strong winds next week, but west winds will bring more rain than east winds as they are blowing over the Indian Ocean. Looks OK for next week, but maybe some showers.

Meanwhile, the first big Atlantic hurricane has been on the move. They called it "Bill". My dad is called Bill. Not a very scary name. The naming of hurricanes should be updated I think. Keep the alphabet, but not "Bill".. Let's say "Hurricane Bast**d". Well, actually Bill did not do much damage, but I saw the effects of Hurricane Mitch on Honduras back in 1998. Mitch sounds like a nice guy. Hurricane should have been "Hurricane M*therF***er". Killed thousands.

Have a nice weekend!