Sun, sun and sun. This is low season?

As my wife asked this afternoon... "Is this really low season?". The whole week has been sunny. Was there any rain. Not that I recall, maybe some isolated patches of drizzle. Maybe some in the night, but the days have been great. So maybe the "Summer in Phuket" marketing campaign is not so silly as some people think. Personally, I have always liked July. Plenty of good weather. My parents visited from the UK in July several times and the weather very rarely stopped us doing what we wanted. if you look at the rainfall averages, you can see that July is the driest of the low season months, not much wetter than November which is officially high season. You can check the weather reports from July 2006 - 2009 on the blog archives (link on the left of the page).

After work on Wednesday, I drove into Phuket town to see the Phuket Flower Fair being held at Sapan Hin. Some amazing orchids on display / for sale, as well as plenty of other plants. Tomorrow is the last day if you want to see it.
I was surprised at how many people were there on a weekday evening. There are a lot of keen gardeners in Phuket! We like to have lots of different flowers, especially orchids, in our garden. 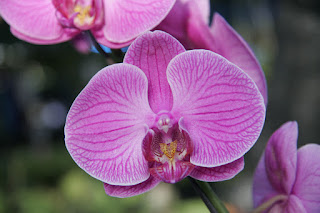 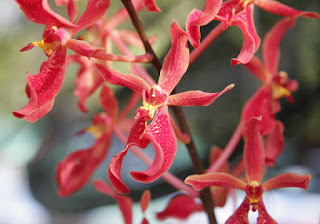 On Thursday, after another sunny day (a bit windy mind you, good for sailing, but likely to upset some stomachs on boat trips), we had a little meeting in the evening of the Phuket photo group, some of the people who took part in the Phuket photo walk 2 weeks ago.. just an informal gathering, people showing some of their favourite photos, get to know each other. Always interesting and educational to see what photos other people take. Everyone finds their own angle and I like to get ideas from other people's photos. We might do another photo walk in the near future.

Yesterday, another hot day. I strapped on my Reeboks for the first time in weeks (yes I am a lazy fat panda) and went for a run/jog/oh-my-god-my-lungs-are-burning in the evening. So felt less guilty about chugging some beers later.

Today, Saturday. My day off. Lovely day again. I have some sunburn. Red face, neck and arms. Neck especially as I had a haircut in the morning. The local barbers charges 80 Baht for a haircut. Good deal. We then met some friends and headed for a place called Bang Rong on the northeast coast of Phuket. We've been many times to eat at a small restaurant floating in the mangroves. We had seen that they have kayaks for rent at the restaurant, either to paddle yourself or they can provide a paddler for you. So today we decided to get some kayaks! Will be blogged soon... and we'll do it again soon. Only 150 Baht for a kayak, extra 50 Baht to get someone to paddle for you. It was heading towards low tide - would be better at high tide to be able to follow some of the side channels. We were out for about 45 minutes and everyone enjoyed the experience... 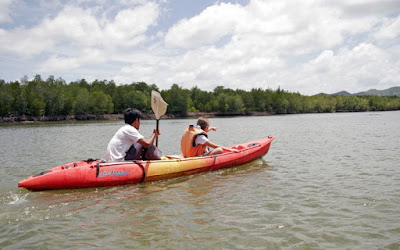 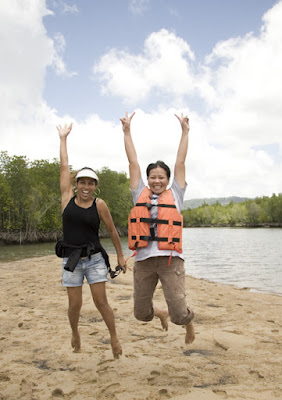 My face is burning from too much sun today. Ah yes, the low season. Do I have to say it again? Sure, you might get some rain.. you might be unlucky, but most of the time, I LOVE this time of year in Phuket. See you soon la.

And please stop raining in Birmingham so we can whoop the Aussies.

Sun, sun and sun. This is low season?  |  The Phuket Weather Blog