The last few days have not seen any spectacular weather. The wind has continued to be quite strong, patches of sun, showers of rain dotted all over the island. No real heavy or sustained rain, but enough to force you to sit round the bar with a cold beer rather than sunbathing :) Was quite lucky to get a rain free street procession in my local village on Wednesday night (see photos here), but on Thursday morning it was nice and wet again. Now, in general I think driving in Phuket (in a car) is not dangerous. The roads are not too fast, and except for the occasional loony, people tend to drive pretty well. No worse than "back home" anyways.

BUT, seems to me that anytime it rains, you'll find a truck in a ditch on one of the many hills around Phuket. Often between Patong and Phuket Town, often - like this one - between Kata and Chalong. I tend to avoid getting close to big trucks on hills in the rain. This was on Thursday... 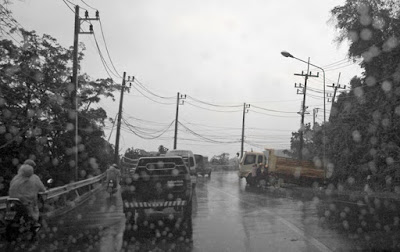 Friday was similarly blustery and showery with patchy sunshine. We may have just been catching the very edge of a tropical storm centered off the east coast of Vietnam which has all gone now. In all the time I have been here, Phuket has never been hit by anything like a tropical storm.

For the record, Thailand has only ever once been hit by a storm with Typhoon strength winds. This was Typhoon Gay in 1989. My wife remembers it well, as it struck Chumphon province on the east coast and her family home was flooded.

Saturday also rather showery, but again we got lucky and a friend's party for their kids birthday was rain free in the afternoon/evening. Seemed like the wind was dropping off on Saturday night, and sure enough, although yesterday had some showers too, it was much sunnier and calmer by the late afternoon. I could really feel the weather change from about 3 - 4pm. Today is much nicer and the forecast on Windguru looks good for the week and next weekend. Already planning a day out on Saturday.

Meanwhile, Typhoon Morakot has been kicking the cr*p out of Taiwan - check this video on YouTube. I am glad to be in a Typhoon free zone, and so will not be complaining about a few wet and windy days! For now, the sun has got his hat on again. Hip Hip Hip Hooray!