Nearly April and still No Rain!

Well, we're not in a desert here. Phuket is a very green place, with jungly forested hills and and average of 100 inches of rain per year (see Phuket Rainfall Averages). But this is the dry season. During the months December - March the average rainfall is less than 10 inches - a full 4 months getting just 10% of the yearly rainfall. So I guess I should not be surprised that it feels hot and there's no rain! Last month there was just 12mm of rain recorded in Patong. March so far : 10mm. Average for March is around 100mm (4 inches). There was some promising cloud a couple of days ago, but nothing happened.

Looking at the Phuket Weather Radar gives an idea of whether any rain is in the area. Right now as I type, I can see some dots of cloud, there might be a drop of rain in there, but that's on the mainland around Krabi and Phang Nga. This evening in Phuket, hot and windless. We have no aircon in our living room, but that might change. I like to feel comfortable. On nights like this, for sure the aircon is turned on for sleeping, but I'd also like to feel rather less sweaty while blogging.. and the bedroom's not really big enough to move the computer desk into. the cost of installing an aircon unit is not large, around 15 - 20,000 Baht will get one big enough for our lounge.. but the electric bill at this time of year shoots up - last month was 2,600 Baht. In the cooler season it's around half of that.

Customers come into the dive shop and make approving noises, pretend to be interested in masks, and hang around a while to get cool before braving the heat again. When you come here direct from Northern Europe or the frozen wastes of Canada it can be a shock. First time I went any place real hot was 1985, a trip to India. I melted on the first day. Could not believe that heat could be so hot! Rule 1: drink lots of water. Today has been a scorcher, around 36 - 37 degrees C (that's close to 100 Fahrenheit, in case you are American). I call that "hot".

Actually, it's not so hot. The photo below shows a much younger me, back in the summer of 1991. Location: Sacramento, California. 110°F in the shade. 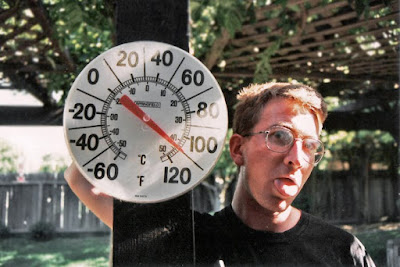 On Saturday (20th) we took advantage of the great weather and did something I have meant to do for a while. More will be on my Phuket blog later.. We had lunch at Samchong Seafood in Phang Nga, less than an hours drive from home, and from the restaurant we arranged a longtail boat into Phang Nga Bay for the afternoon, visiting James Bond Island and Koh Panyee. Weather: Perfick. A couple of photos below... 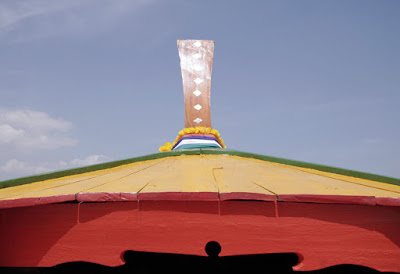 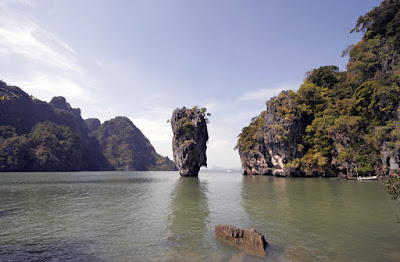 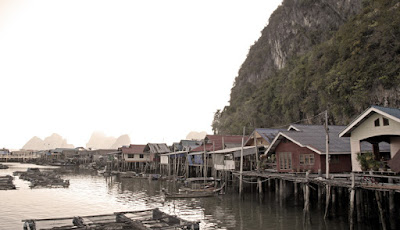 More photos of the trip @ James Bond Island on Flickr.

And all about Our Visit to James Bond Island on the Phuket Blog.

A great day out. I love the Phang Nga area. We'll probably do the same trip when my parents come over here in September... although the weather in September is rather different.

How much longer will this rainless sky last? Normally April is a bit wetter than March, there should be some thunderstorms in the evenings now and then. The winds have now died down.. there have been some fair breezes blowing from the northeast this month. With no wind, cloud has more chance to build over the hills. Maybe in the next week we'll get an end to the drought :)

Added: I am informed by a couple of friends who live around Kata and Rawai beaches that it rained for 20 minutes Tuesday night around 2am.. Simon says "It rained in Rawai Tuesday morning for about 20 minutes at 2am - how do I know, cos the wife had cleaned the sofa and left it outside to dry, she woke me up when the rain started to bring it in, off I go and one step on the wet tiles and I'm flat on my back with my foot under my buttocks ... by the time I got to the sofa it was soaked and the rain stopped just as I finished dragging it in - should have stayed in bed!! - blooming weather!??! :-)"

Nearly April and still No Rain!  |  The Phuket Weather Blog