Where are those April showers?

This is now becoming a very dry April. After those few days of heavy evening rain at the end of March, I thought we might have a bit of rain in April. On average, April is wetter than March, and you can expect evening or afternoon thunder which is Mother Nature's way of dealing with the heat - it's a hot month, and the heat can produce sudden heavy downpours that normally only last an hour or less. But so far this month, I don't recall seeing ANY rain at all.

I know there has been some... Malcolm, owner of the Seaside Cottages at Mai Khao Beach sent me a message.... they had some rain on Friday night "we had some rain last night for about 1 hour at 8pm ish. Just happened to be on the same day that we decided to replace the roof on our house. Only a day's work but the builders took 3 hours for lunch and left before there was no sign of rain with roof only half complete. I should know better than to expect only 1 day from previous experience with builders here. So an hour's downpour left us with a flooded cottage" - I am sure it's all dried out now. On Friday we could see flashes of lightning to the north of our house, but we got no rain - it's about 30km from our house to Mai Khao Beach.

Yesterday, very hot again. I had to take a trip to Phuket Town to get new lenses for my glasses, having managed to drop them during the Songkran festivities. The optician needed about 90 minutes, so I took a walk around town. A 30 minute walk was plenty in that heat.. but it was still quite early and some small cafes in town don't open until at least 10am.. so I found myself having an airconditioned McD breakfast set with a burger, hash browns and coffee, only 85 Baht.

Later in the day, with all my family back from visiting the inlaws in Chumphon, we headed to one of our favourite places, The Beach Bar at Cape Panwa. It'll be closed after the end of April for low season, so we might not be back for 6 months! It's very peaceful, food is tasty, beers are cold, kids love to run around and play on the beach. And the sunset is OK, too... 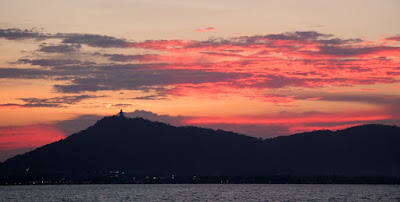 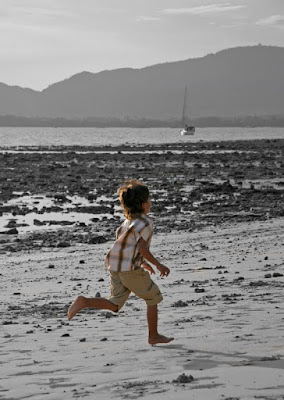 There will be some changes in the weather in the next few weeks, but for now it's hot and there's hardly anyone here to enjoy it! Gone very quiet, maybe due to Bangkok troubles, or that volcano that's grounding European flights - or as usual because people seem to believe that April is the start of low season. No! It's still high season, very hot and sunny.

Where are those April showers?  |  The Phuket Weather Blog