I knew it - Phuket is not a rainy place!

It's often seemed to me that Phuket is not so rainy. Seems like we get less rain than Bangkok, less than Ranong about 300km North, less even than Khao Lak, just 100km North, less than Borneo or Singapore or the Philippines. I have wondered if that was my imagination, but Phuket does seem to be in a dry spot. I have in my possession rainfall figures for the last 10 years. Average about 2500mm or 100 inches per year. BUT Check these figures - Ranong average around 4000mm (based on 30 year average, data at the TMD website).. the average for Phuket on TMD is also around 2500, same as the data I have. Bangkok looks about the same as Phuket actually. Takua Pa (town just north of Khao Lak) - average about 3500mm per year - way more than Phuket.

I was looking at my old Times Atlas of the World a couple of days ago - trying to get my kids nerdy by looking at maps. Found a great map of "Mean Annual Precipitation"... 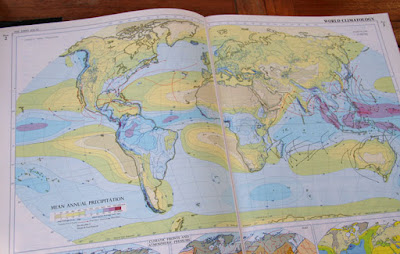 Check out Phuket (I have marked the location of Phuket with a red spot). It's in an odd rain hole. All around the average is much higher - the pink areas indicate 3000mm and above. Phuket and the surrounding area is blue, which is 2000mm and above. It's like a hand above Phuket. I knew it. Happy that the amazing Times Atlas has proven me right! 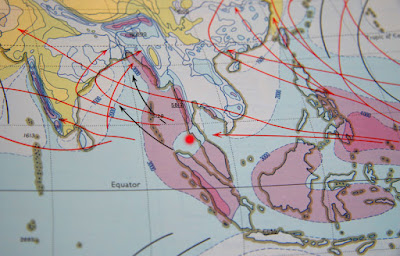 Phuket is certainly dry so far this year. During May the recorded rainfall has been just 145mm. Driest since 1998. A few thunderstorms, but a real "low season" has not kicked in yet. Last 2 days have been hot and sunny with no rain. May has been a good month this year for anyone looking for a cheap holiday. Low season hotel prices drop way down on high season. Click the Agoda links on the left side to get hotel rates.

Here's a view from a few days ago, Friday 28th which was a cloudier day and there was a little rain. I met the family for a drink at a little restaurant on the way up to the Big Buddha.... You can see Chalong temple and Phuket Town is in the background. The bigger hill on the left is "Monkey Hill" on the north side of Phuket Town. 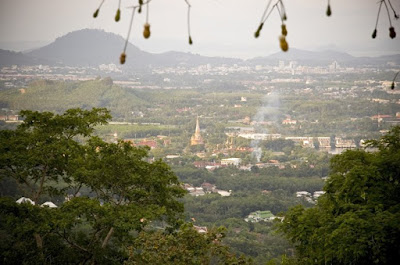 I knew it - Phuket is not a rainy place!  |  The Phuket Weather Blog