West winds and a little bit of rain

The "rainy" season, aka "low" season, or "MONSOON!" season, better known locally as the green season or summer season.. is here! Well, just about. Since the last weather blog update on the 20th, we've had some rain every day.. that's 6 in a row, but not much. Heaviest rainfall recorded at Casa Jamie was 6mm on the 21st, same on the 22nd. The 21st was due to a little thunderstorm, the 22nd was a real change in the weather - a cool, grey, drizzly morning with much cooler temperatures. I posted a few photos on Faceboook. Will do that sometimes, or will TWEET about the weather, not really time for proper blog updates daily - please do follow me on Twitter - www.twitter.com/jamiemonk.

Happy that my nerdy weather toy, the rain gauge, finally got some action. Here's the digital data box thingy, photo 9am on the 22nd showing that 6mm of rain had fallen and the temperature was a wonderfully cool 25 degrees. Brr. Get the woolies out! 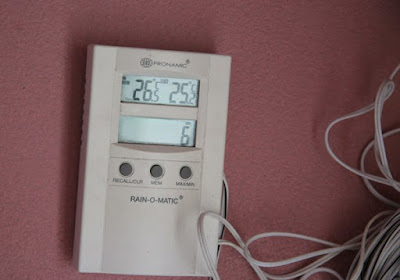 The temperature gauge on this machine is more difficult.. The minimum temperatures I think are about right, in the range 24 - 26 degrees C in the last week, but the maximum... the sensor is outside the shed, in the shade but I think being affected by radiated heat from the bricks and concrete. It's on a 10 meter wire, so maybe I can find a better spot for it. OK enough nerdy weather stuff.

The winds are now set from the South West. Which means it is officially low/wet/green/whatever season, but please please people don't be believing the forecasts that you see on the BBC or CNN etc... They tend to use the "chance of a thunderstorm" graphic for months at a time.. which is true, there is a "chance" of a thunderstorm. There is plenty of info on this blog (check the archives links on the left side) to show that the low season weather is often lovely. Sure, can be cr*p sometimes, but it's very rarely CR*P with capital letters.

This morning there were raindrops on the plants, but it's not rained all day since. Mostly sunny, but that wind is now making for waves at the beaches. Please, if you come to Phuket and the waves look quite big, think twice before going for a swim, especially if you are not a strong swimmer. There is plenty to do and see in Phuket that does not involve sitting on the beach.

A couple of photos from the garden this morning. 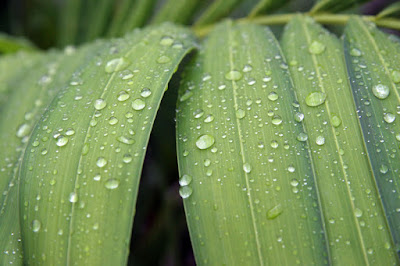 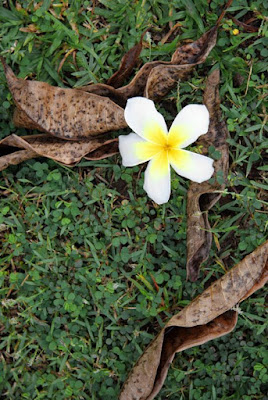 Meanwhile in Bangkok. There was a huge clean up by the people themselves. I don't even want to say the words Red Shirt. Try this photo for the real Thailand: 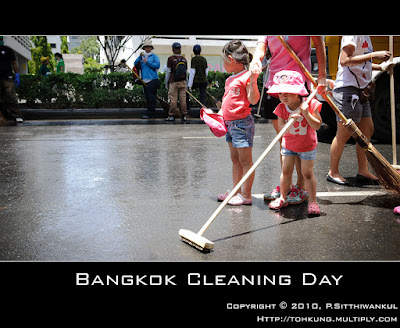 Thailand - Together We Can. Yes, that means everyone.