I somehow failed to update the weather for over a week. I think that's because there has been very little weather to update. The days have been sunny with patches of rain and some cloudy skies, then some more sun and blue sky, dark clouds forming and retreating, a few showers and not much wind.

People worry a lot about the weather in the low season here in Phuket which tries hard to be a year round destination.. certainly is for me! I like low season weather. I mean, not every day - sure there are some stinkers now and then, but in general it's cooler, the island looks greener (so the season is also called the Green season). I look at the TripAdvisor forum for Phuket quite often and answer questions, in fact I was a designated "Expert" for a while but in high season had no time for chat and forums, so found myself to be no longer considered an expert. A few recent quotes/posts on the forum about the low season weather:

I was there last Tuesday to this Monday. No rain at all for 6 days. Well maybe slight drizzle for like 5 minutes.

We were in Phuket (Karon) in September last year for 10 nights and will be returning for 12 nights this September (can't wait). During the 10 days it rained one day and got a short shower during one evening.

Arrived back this morning, having spent 10 days there. Apart from a little drizzle as we were leaving yesterday afternoon, we only had one wet day - very kind indeed!

The last real wet week we had was end of July, around 25 - 29, as I reported here. The total rain in July was 253mm, a little over average. So far in August I have measured about 90mm - and the monthly average is over 300mm, so it is indeed a dry month so far. (See Phuket Rain Monthly Averages).

Of the 90mm, I recorded 46mm on Friday 13th, so you can figure it has been very dry almost every other day. The heavy rain on the 13th caused some minor floods in Phuket Town reported the Phuket Wan website.

On the 14th, I was a bit worried for the weather as I wanted to attend a ceremony in Phuket Town. Rain came and went, dark clouds appeared and disappeared, I drove into town around 4pm with light drizzle still falling, but by 5pm it had all cleared up and I enjoyed couple of hours in the grounds of the Hongyok family where a traditional Baba wedding ceremony was taking place. Sunday and Monday were both nice sunny days, no rain at all, a few showers on Tuesday and Wednesday. Today has been mostly sunny. Here's a blue sky photo - the little temple is just outside the door of Sunrise Divers in Karon Beach. 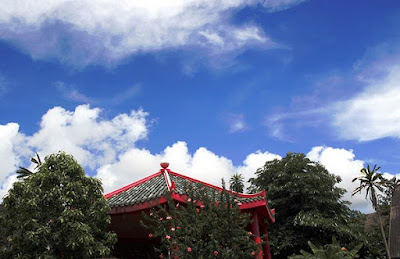 And for no particular reason here is a photo of one of our cats, who decided to sleep on the roof of the car this morning.. I think the reason being that I could not fail to notice him there, and thus would feed him :) 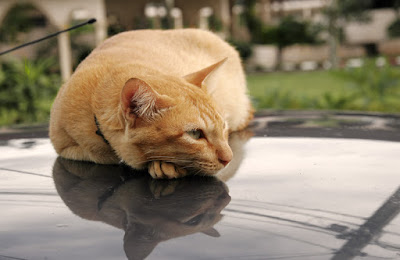