A week of changing weather in Phuket. Last update was saying how the weather in low season is not too bad, and then .. update was Thursday last week and of course having said how things are OK.. it p*ssed down with rain on Friday morning. In fact the whole weekend was pretty grey. Not much rain, but the kind of weather that makes you wonder if, in fact, you should have gone to Scotland instead. Ah, maybe not, at least it's still warm here.

I stopped at Karon Beach on Sunday morning to try get a photo that might give an idea of how grey the morning was. 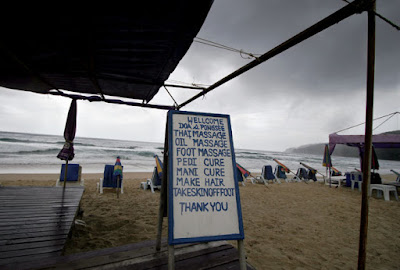 The rainclouds can come in fast at this time of year. The photo below was taken 4 minutes after the one above as the rain started to fall and the dark clouds were suddenly everywhere. 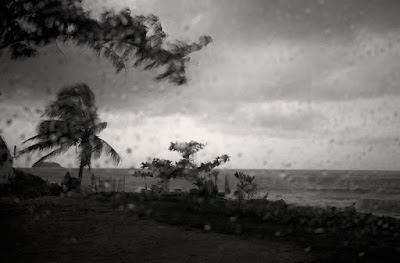 So, yeh. It's not lovely all the time! And then Monday was pretty wet too, I measured 38mm of rain but that was mostly at night and I had a feeling things would clear up. We may have just caught a trailing arm of a tropical storm over Vietnam - if you see the satellite photos of such storms, the affected area can be huge. There was some minor flooding in parts of Northern Thailand early this week due to the same storm which dissipated quickly when it hit land.

The last 3 days have been dry, getting sunnier, the sky getting bluer. This afternoon(Thursday 26th) the sky was so blue it reminded me of this Blackadder sketch:

Percy: You know, they do say that the sky over Phuket is more beautiful than
the famous Stone of Galveston.

Percy: The famous Stone of Galveston, My Lord.

Edmund: And what's that, exactly?

Percy: Well, it's a famous blue stone, and it comes (points dramatically)
from Galveston.

Edmund: I see. And what about it?

Percy: Well, My Lord, the sky above Phuket is bluer than it, for a start.

Edmund: I see. And have you ever seen this stone?

Percy: (nods) No, not as such, My Lord, but I know a couple of people who
have, and they say it's very very blue indeed.

Edmund: And have these people seen the sky above Phuket?

Percy: No, I shouldn't think so, My Lord.

Edmund: And neither have you, presumably.

Blackadder script from here. And the same sketch on YouTube:

Very very blue indeed. I took a few photos at Karon beach this morning. Sunny but still quite wavy and not safe for swimming. Thai flags fluttered in the wind along the beach road. 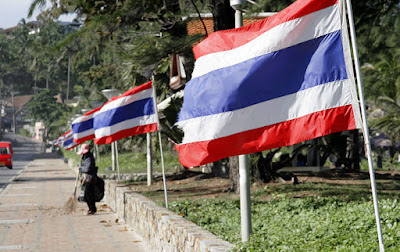 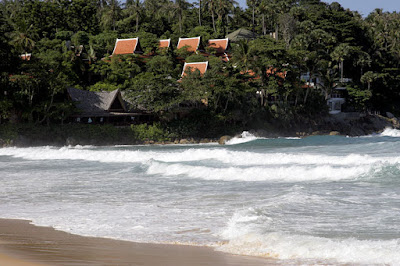 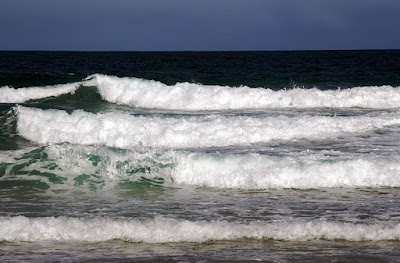 (above) Waves at Karon Beach 26th August. Ok for surfing I guess but people must be very careful in the ocean at this time of year.

And yes, the sky today - perfect. This is the view outside Sunrise Divers office in Karon. It's been blue all day. 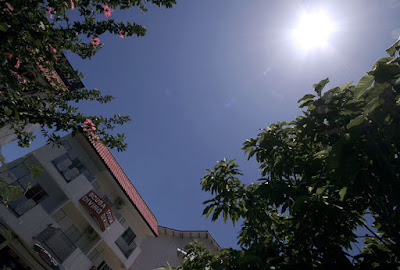 Sun is shining in the sky
There ain't a cloud in sight
It's stopped raining everybody's in a play
And don't you know
It's a beautiful new day :)