Maybe it's something to do with this being an El Niño year - when ocean temperatures are higher and climate is a little odd... It has been a drier than average year so far except for June where I measured more than 500mm of rain, compared to 50mm rain in June 2009! July was then pretty average though half of the monthly rain fell in a 5 day period at the end of the month.

September has had rain, but the last few days have been hot, sunny and dry. Maybe the odd shower here and there, we heard some thunder yesterday but did not get wet ourselves. My parents arrived from the UK on Tuesday 14th, which was a hot sunny day. Rained quite a bit in the night of the 14th, and the morning of the 15th was fresh and green. if I walk a couple of minutes from our house, I get this view below. On Wednesday morning the clouds were hanging around the hills. 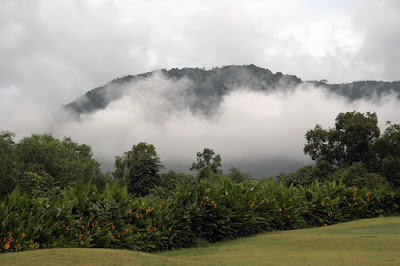 But the skies were clearing up already. It did rain a bit more during the day, but only light rain, which my dad called "pleuting" .. that's a "dadism", making up odd words. This one obviously from the French word "Pleut" = "Rain" and needs the "ing" to make the present continuous form of the verb "To Pleut". Feel free to use this work next time a light rain is falling. Pleuting. 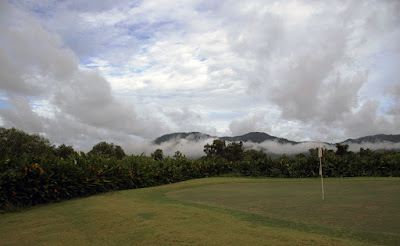 The 16th was a gorgeous sunny day, hardly any waves at the beaches. I took a little lunchtime walk at Karon Beach close to our dive shop. The sand at Karon (when dry) squeaks. It was bloomin' hot at midday, and this beautiful scene was being enjoyed by those few low season travelers who take the risk with the weather. This week, that's a Win!

Although it looks fantastic, and I'd say Thursday would have been safe to swim, you have to be aware of waves and rip currents in the lowseason. There are signs and red flags at regular intervals along Karon Beach.... 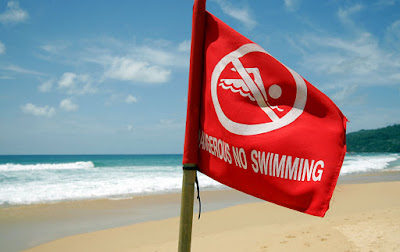 Friday 17th I was working... will have a holiday for a couple of weeks starting Tuesday ... my parents borrowed the car and went up to Nai Yang Beach in the north of Phuket and had lunch at Batik Seafood, which we had first eaten at with them last year. Nice little place with tables right on the sand.. You struggle to find restaurants like this on the main beaches. Here's mum and dad's tropical drinks : 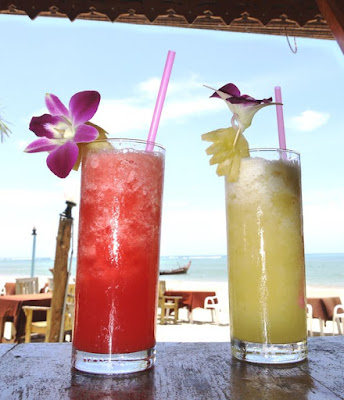 Saturday 18th - slow start to the day, we are almost at the end of school term. During the week we are up at 6 - 6:30am, kids start school at 7:45am. So Saturday is often a bit of a lie in. I was not awake until 9:30. We made no plans - at this time of year you can't be totally sure what the weather will do. First stop was noodles at a little noodle place we have been going to for years on the road up to Kathu Waterfall... 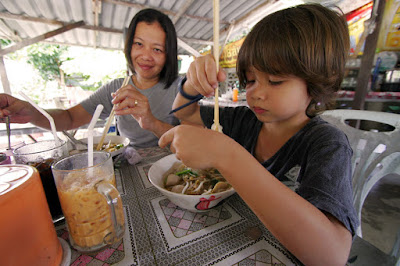 Since the weather looked a bit grey, we decided against the beach.. and also the kids have some tests at school next week at the end of term, so did not want to tire them too much.. it was only 10 minutes drive up to the Phuket Mining Museum.. I wanted to see if it was open again - it had been kind of open earlier in the year, although not 100% complete. Now it's closed again, there is lots of work going on, they have been building a huge replica of a tin mining operation with pumps and conveyors and sluice boxes, and this very nice bridge... It's Sunday now, a mix of sunshine and showers and it's bloomin' hot again! I'll start a holiday in a couple more days. More sunshine please. I really don't mind if September 2010 is the driest for 10 years!