I am now on holidays until the 7th October, holiday started a few days ago. Mum and Dad arrived from England last week, and kids school finished on Wednesday, so the real holidays started yesterday for everyone and we have plans for some trips in the next 10 days such as a couple of nights in Khao Sok national park and a trip around Phang Nga Bay, plus a guided tour in old Phuket town accompanied by a university lecturer whose grandfather was governor of Phuket. We'll be busy!

This September is proving to be very dry. In the last few days since the last weather blog update there has been very little precipitation. Sunday I was working, Mum and Dad took some time to explore around the Sapan Hin area in Phuket Town, and then we hit the Weekend Market in the evening. Will probably head back there this weekend too as I want to get some new photos. I noticed from my office chair that Monday had been a lovely sunny day too - Mum and Dad went to Naiharn, photo below shows clearly the problem with beach life in low season - sunny and hot but you can't swim in them waves! 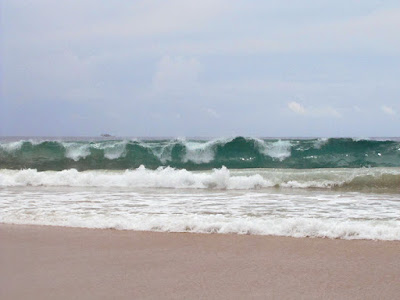 Tuesday - holidays! Well, almost.. I keep a laptop with me on holiday and answer emails, normally in the morning, leaving the day free. We used Tuesday very well with the kids still at school, my wife and I dropped our pick up truck off for a service and went for lunch with my parents at Pak Nam Seafood just north of Phuket Town. Then my wife took the truck and Mum and Dad and I did some temples... I have blogged a lot of Phuket temples, but there are more... I wanted to look at Sapam Chinese shrine, about 6km north of Phuket Town. It was a HOT day. Sapam shrine will be blogged on Jamie's Phuket sometime soon, it's one of the participating shrines in the vegetarian festival, and the first of the street processions on 10th October this year starts from Sapam. And then we stopped at Wat Tha Ruea (also 2 Be Blogged!), which is between Phuket Town and Thalang in the center of Phuket. A monk decided my Thai was better than it is, and talked to us about this boat they are building, some of the wood was found on the temple grounds and he said it's 1000 years old... And THEN, in the afternoon heat we detoured to the west of the Heroines monument, where a new reservoir has been built in the last few years. A road heads all around the reservoir and we'll go back again soon. 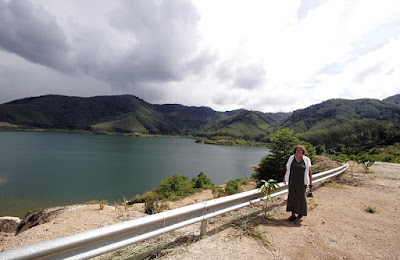 There was some heavy afternoon rain on Tuesday - you can see some dark clouds behind the reservoir. Rained on us as we drove home but only for 15 minutes.

Yesterday was one of those "will it? won't it? (rain)" days. Looked like dark skies so we decided not to take the kids to the beach, instead headed to the Aquarium which the kids always love. Today (Friday 24th) has started hot, might rain later here and there on the island of Phuket. We're heading out to lunch in a minute. Plan on a photoshoot in Kathu village and Kathu market later this afternoon :)