So a week ago, Phuket was bracing itself for the BIG STORM which caused serious flooding in Southern Thailand, but nothing much happened in Phuket. We had a couple nights and mornings of heavy rain and that was it. No floods, and by the evening of 3rd November when I went see see off some liveaboard customers, weather was great - blue skies and calm seas. Weather changes fast. That was all in the last update.

Rainfall since the 3rd ... my trusty rain gauge has measured 1mm in 5 days and that was last night. Might be some rain tonight. It's been hot and steamy, sky quite hazy, winds are still blowing from the west which is odd for November, you'd expect the direction to change by now. I noticed the waves still looked a fair size at Karon Beach today. But in general, decent weather, despite the haze and waves.

Saturday was hot, and we spent at least an hour hanging around outside Phuket Fantasea due to poor organisation by the school who'd organised a kids and parents trip at a special school price... but had not actually got the tickets yet, so hundreds of people were queuing on a hot afternoon. I'd never been tempted before to visit Phuket's biggest tourist show, but... I admit, it was good. Kids loved it. We might go again actually.

A couple of pictures outside the "Palace of the Elephants" - the main theatre which seats 3,000 people! More about Phuket Fantasea on Jamie's Phuket - and you can book tickets for the show with Easy Day Thailand. 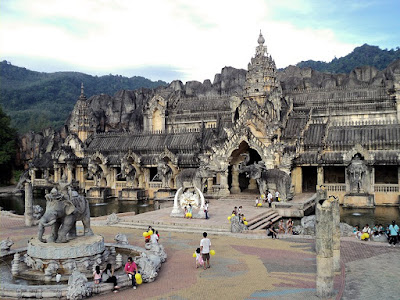 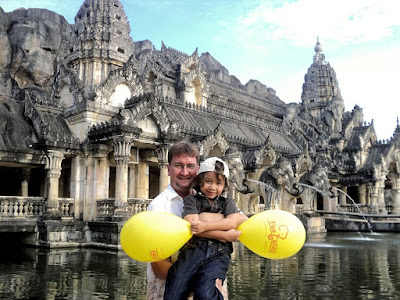