Weather was in the news a lot during 2010, there has been "odd" weather all over the globe with floods in Thailand, Australia, USA and the worst in Pakistan. The floods in Thailand started in the North of the country affecting huge areas, and then later there was a big low pressure system over Southern Thailand which cause big floods in Hat Yai, Pattani, Koh Samui, Songkhla and other southern areas. In Phuket we were all waiting for this big storm but Phuket was totally unaffected! I mean, yes we got some rain from the 1st - 3rd November, but nothing like what was predicted. Phuket just does not get really bad weather. I mentioned this earlier this year : Phuket is NOT a rainy place.

We have had odd rainfall in 2010. You know it's an odd year when December is wetter than August or May... I keep telling people to come to Phuket in low season, the weather is often nice, just don't count on it... and if your plan is just to sit on the beach then low season is not to good since the prevailing winds blow onto the beaches and waves can be quite big. But if you want to explore Phuket and the surrounding area, low season is great. And anyway, you can't count on the weather in December either, so it seems! 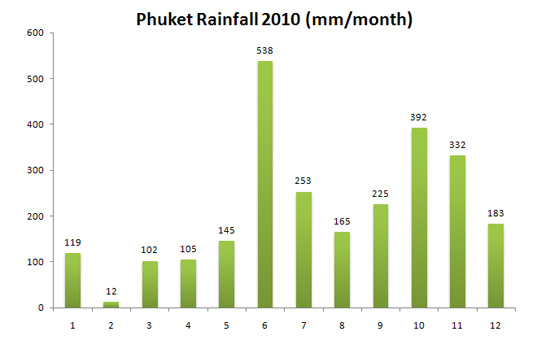 January 2010 was actually very dry - it only rained on 6 days, but a couple of those were unseasonably wet and the rainfall of 119mm was the wettest for at least 10 years! We also had the driest May for 10 years followed by the wettest June for more than 10 years! And August, September and October were all drier than average.. compensated for by wetter than average November and December. In fact December was another "wettest for at least 10 years" month. All mixed up. You can see more details and read reports from every month - see the Phuket Weather Archives link at the top of the page...