Personally, I think Phuket does have more than just 2 seasons. Websites that say simply "Dry from November to April, and wet from May to October" are not telling the whole story. November is dry season? I have rain data back to 1998. In 7 of the last 13 years, July was drier than November. Last year December was wetter than May. Low season weather is often pretty decent. Tourists are sometimes surprised to be having rain when they were told that it's "dry season" by their travel agent. Fair enough, on average, the 6 wettest months are May to October and this is due to the wind - the prevailing wind in the low season is from the Southwest, across the Indian Ocean, also called the Southwest Monsoon wind.

I think we also have a "cool" season here which is essentially winter - December to February. The days are a tiny bit shorter, the skies are often quite clear and the nights can be noticeably cool by Phuket standards, meaning 22-24 degrees C. And now, with the arrival of March, right on cue, the HOT season is here in Phuket. The winds that sometimes blow quite strongly from the northeast in the high season will die down, and we get some hot days with very little cooling breeze. Seems to me like every day since 1st March has been like this. It's hot!

And with the heat you can get thunderstorms. Heat rises, taking moisture with it, and then often in late afternoon or the night, this moisture cools and condenses and mixed with still rising warm air currents, you get thunderstorms. We had a cracker on March 1st, with 30mm of rain, and another one on the 2nd, with 21mm rain. Both in the night time. Have not seen any rain since then, except a few drops tonight. Looked like a thunderstorm was coming last night but did not reach where I was. May have rained in Patong a bit. I love big tropical thunderstorms :)

The weather forecasts at this time of year are useless. Most main weather websites have a thunderstorm symbol EVERY day, which looks a bit scary. This means "chance of a thunderstorm" or "scattered thunderstorms" and should say "Look, it will be really hot and sunny, and you might get a thunderstorm late in the day or in the night, or you might see distant flashes of lightening and get no rain in your location".

I stopped at Kata beach for a few minutes on March 4th, which happened to be my birthday. Blue skies, nothing but blue skies. 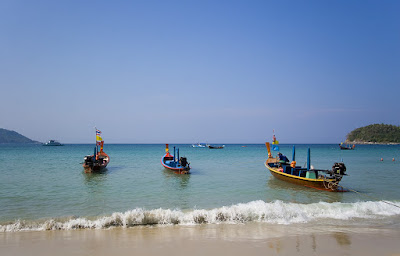 The weekend has been (you guessed it) HOT. Saturday is my day off, but we did not do much - my wife has a bit of a paranoid streak with the weather - too hot for the kids, they might get sick... and they have end of year school tests next week before a 2 month "summer" holiday. Thai school holidays fall at the hottest time of year. We hung around the house most of the day having family fun. My main achievement was to build this: 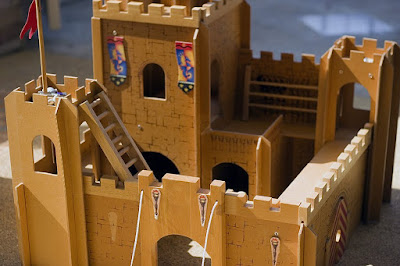 Hey that was hard work on a hot day! Some friends are leaving Phuket and gave us a bunch of their old toys and so on... the castle came in pieces, about 50 pieces and screws ... and no instructions. I was quite proud of my castle! And happy that it was appreciated on a hot Phuket day :) 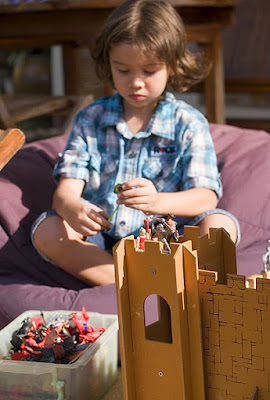