Someone asked me today "Is this the wettest March on record?" - well, not quite yet.. I only have rainfall data back to 1999, and in 2001, March had 249mm of rain. Sounds more like a low season month - average for June or July is less than that, and the average for March is a little over 100mm (see Phuket rain averages).

(Update 29th March): It is the wettest March now! Wettest since at least 1999 anyway. After 100mm of rain on Saturday, we had 40mm on Sunday and it got windy too, I only measured 25mm yesterday but it was not a day to be out on the ocean... some yahts were washed up on the beach at Ao Yon (Cape Panwa) yesterday! Forecast gets better starting tomorrow (30th)...

The last Phuket weather update was on 21st March - and it had been a hot week. Between the 10th and 17th there was no rain, March was looking like a hot dry month. But all that heat has to go somewhere (mostly up) and this messes with the weather. All of last week starting Sunday 20th, I have been finishing at the dive shop at 6pm, which is nice, enough time to head somewhere for a sunset photo. I wanted to stop at the well known After Beach Bar which is up in the hills above Kata Noi beach, but on Sunday it was cloudy, on Monday it was raining in the evening, on Tuesday it was raining in the evening... I had my camera in the car and took the photo below while stopped at a red light near the Prince of Songkhla University not far from our house. Rain and lights and streaks of headlights. 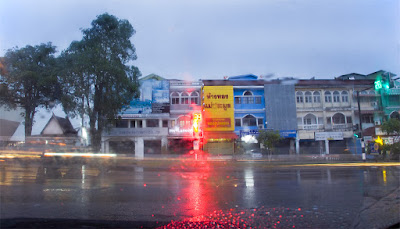 No worries, surely the weather would improve. You can get rainy evenings in the ot season, nothing unusual. Well, the whole week has been rather grey. I had no sunny evening for sunset photos. The weather was not what it should be! Nothing really bad, but you know, this is Phuket and people expect to get sunburn in the high season! And this weekend - worse. There has been flooding in some parts of southern Thailand around Nakhon Sri Thammarat. I saw pictures of floods in Koh Samui and Surat Thani on Camilles Koh Samui Blog. So I have a day off on Saturday. I had planned some things to do - head out and take photos at Cape Phromthep, Naiharn Beach, maybe a roast dinner at The Green Man, but the weather did not play along. Yesterday, my faithful rain gauge recorded 100 (one hundred) millimetres of rain. That's 4 inches. About the same as the average monthly rainfall for March. In one day. So we got wet. I kind of hibernated all day aside from some odd jobs around the house and going out to buy cat food and beer (I don't eat cat food, we have 2 cats). ****! Saturday was so wet, I was a bit annoyed - my day off! A nearby neighbour took this photo of Doomsday over his house: 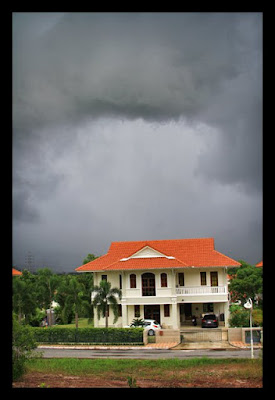 Today (Sunday) has been the same, but with less rain. I did see some sun in the early afternoon, but then it pi**ed down again! The forecast is for maybe another Sh*tty day and then back to the heat! This is normally the hottest time of year. On Saturday afternoon, the thermometer in my garden was reading 23°C - a nice warm day in England maybe, but felt cold to me!

Check the links top left of this page for useful Phuket weather information - there are 2 webcams, a radar loop, and the Windguru forecast is normally pretty decent. And I have been updating my frustration with the weather on Twitter too! I reckon the sun will be back in Phuket soon.