Back in Hot and Sunny Phuket!

After celebrating Songkran in Chumphon, and some fairly lazy days with the family, we headed back to Phuket a few days ago. It had been hot and sunny in Chumphon all week - Chumphon is on the Gulf coast about 400km north of Phuket. We'd heard there had been some rain in Phuket during the week while we were away, but the drive back was sunny all the way. There were obvious signs around Surat Thani of the floods that had hit south Thailand in March, even some fields still underwater and a lot of flood debris which had been pushed into piles ready for collection. My wife and kids had been in Chumphon at the time of the floods, but did not have any problems there, and in Phuket we'd had no floods either, but looks like it was bad around Surat Thani.

Had there been rain whilst we were away? Yes! My rain gauge was reading 47mm, which was the total from the 12th to 20th April. So, not that much really, I guess just some heat thunderstorms. And in the last 3 days since we got back I have seen no rain, though there probably has been a little here and there, since I have seen clouds and heard thunder rumbling around. I have another 5 days of holiday left. We have been a lazy family since we came back to Phuket, except my wife and I have done a lot of house work - call it "spring cleaning"! Garden looks good, house all cleaned up, and now we will have a few days "doing stuff"!

Yesterday we headed to The Beach Bar for dinner and a drink, another great sunset too. I always love this little place and feel relaxed as soon as we get there. And it was busy too! Nearly end of season, but almost every table was taken by the time the sun went down. Hope they might consider opening all low season! 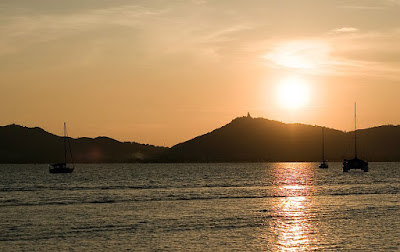 Today we half planned a day out to Koh Yao Noi, but laziness struck. Will do that soon, though! It has been another hot and sunny day, our main achievement being a minor clearing out of kids clothes that are now too small for them, entailing a fun hour in the (aircon) bedroom trying on lots of clothes! We also plan a day to Splash Jungle soon! Actually, my wife and kids have been once before when I was working. I have not been before and reserve the right to act like a kid. Splash Jungle is a big waterpark close to Mai Khao Beach, just north of the airport. Odd location, I am not sure how they are doing financially. Mai Khao is about 40km from our house, so over 45km from Patong and over 50km from Kata or Karon beaches. A major tourist attraction, but a long way from the main tourist beaches. A lack of crowds will suit me just fine, though! Looking forward to it!

Back in Hot and Sunny Phuket!  |  The Phuket Weather Blog