Happy New Year everyone! Yes it's New Year time again in Thailand. We have January 1st, then we have the lunar Chinese New Year and then we have Songkran which is the traditional Thai New Year, and in fact was the start of the new calendar year in Thailand until 1888. Now the year changes on January 1st, but Songkran is still the more important festival. The old traditions (which still exist) included sprinkling water on Buddha images and on the hands of elder members of the family. This sprinkling of water has changed somewhat over the years... Photo above Songkran in Phuket Town taken a few years ago. More about Songkran and more photos on my Phuket blog: Songkran Photos. This year for the first time I have spent Songkran in Chumphon, about 400km from Phuket, about halfway to Bangkok. This is my wife's home town so we've had a family Songkran, and I'll get a load of photos online later when we're back in Phuket.

Weather - HOT every day. I was in Phuket until the evening of the 12th, it was hot every day, and has been hot every day in Chumphon too. In Phuket the last few days, I guess it has been the same, I keep an eye on the Karon Beach Webcam and the Surin Beach Webcam, though my wife spoke to a friend on the phone this morning who said it was raining. Looks sunny right now to me, though a bit of cloud around Karon. 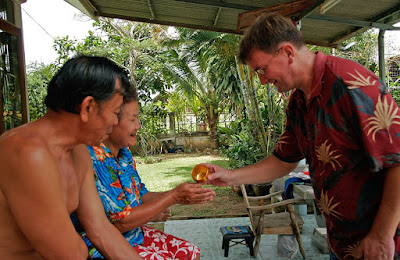 (above) That's me gently pouring water on my wife's parents hands. That's one side of Songkran. Was nice to have a chance to spend Songkran with the family.

On the 14th we headed to the beach in the afternoon. My wife's sister's husband's family has a house at Sairee beach near Chumphon. Picnic on the balcony, walk on the beach. Easy day needed after way too much sunshine on the 13th. 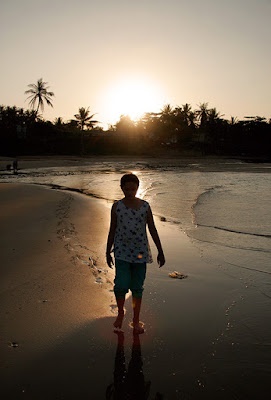 We drove about 120km over to Ranong from Chumphon yesterday to visit some hot springs, splash around in the river and to get some views along the way. The road from Chumphon to Ranong has some great views, maybe the best at Khao Fa Chi - below: Today's weather.. yes, hot and sunny. Sky is very very blue here in Chumphon, and I am sure Phuket is quite similar! We'll go back there in a few days and have some trips around Phuket doing a few things we've not done before, and hoping the sunny weather continues right through April. Great weather right now to dive, sail, tour, explore, and the end of April you have less tourists, since the main tour agencies tend to stop packages at April 15th. End of April, weather is normally hot, and hotels often drop their prices too. Good time to come to Phuket!