May she will stay

This is the time of year when I start to get the Paul Simon song in my head. Well, last month was the start. April, come she will. May she will stay, resting in my arms again. So now it's May. Officially it's low season, but this year the real low season weather has not arrived yet. One might hope for a bit more sun after such a wet March. April was pretty dry, only 113mm total rainfall. Average is 150mm, and most of the month was very hot and sunny - which is normal. I updated the weather blog on April 28th, when we'd just had a week of very hot weather and no rain except for a shower one night. Of course the weather always likes to play games and in the next 2 days we had 33mm of rain, though this was mostly at night. Still very hot.

After my holiday which ended with a couple of days at Khao Sok and Sri Phang Nga national parks, I was back at the dive shop last Friday for a day.. and then a day off on Saturday :)

We'd half planned to visit the Splash Jungle waterpark, but our son had been a little feverish and a day out in the sun might have been too much. We did one of our random drives around Phuket which led us to lunch at Bang Pae Seafood, which we'd not been to for a while... I blogged it 5 years ago, the place has not changed! Quiet, surrounded by nature, tasty local food. I'll probably "reblog" it soon. After eating I took a walk with the kids out on the sand, It was low tide and the water was a few hundred meters from the restaurant. 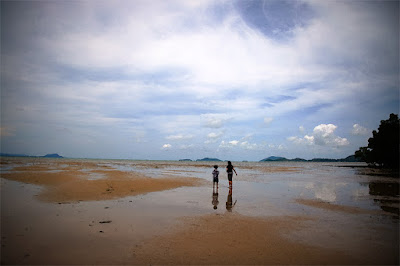 And then back to work on Sunday. Weather for the last few days has been just as you'd expect at this time of year. The seasons they are a changing. It's hot, there is some rain here and there (though my rain gauge at home has measured only a few mm in the last few days), there is lots of sun, there is not much wind, but that wind is starting to blow from the southwest. Weather is actually very nice, and this is often the case at the edge of the season. Decent weather combined with very low Phuket hotel prices! You do take a risk with the weather in May, but the lucky ones get a bargain sunny beach holiday :)

May she will stay  |  The Phuket Weather Blog