Well, after a couple of low season weeks with barely a drop of rain, except a bit of nighttime thunder, looks like we're back to the "real" low season! Had some heavy rain on Monday and tonight (Wednesday) a big ol' wind just blew up, bound to be some rain later. I just dashed outside shutting windows and trying to convince the cats that they'd be happier in the house.

We took advantage of the nice weather at the end of last week. On Thursday I took a day off so my wife and I could have a relaxing kid-free day. Lunch at good old FUJI, one of the Japanese restaurants in the Central Festival mall outside Phuket Town. And then a little walk in town. I just blogged about walking in old Phuket Town last month, I like to head in that direction quite often. Above - Soi Romanee, the pretty little side street that heads north from Thalang Road. A blues band was practicing in the Glastnost Cafe as we walked past. It was a hot afternoon, and seemed to be siesta time! Some more photos taken on that little walk ...

Friday - still hot. I Tweeted "Another lovely sunny morning in Phuket. The whole week has been like this. I keep saying it Low season is not so bad!" - you can follow me on Twitter @jamiemonk - I post weather updates almost every day plus a whole lot more cr*p! :)

Saturday .. Hey! Another day off! And it was still hot, though rather hazy. Sometimes you can feel that the rain is going to come... I did not see any rain on Saturday though. We took a little drive on Saturday over to Sirey Island - yeh, it's not really a true island, you drive east from Phuket Town and over a bridge which crosses a narrow channel near the fishing port. We like Koh Sirey. Some parts of the "island" have been developed such as the new Westin Sirey Resort, but much of the area is very quiet and green. I especially like the temple which sits atop a small hill, great views all around ... And there's a big reclining Buddha inside the temple: Well, after Saturday the weather started to change - heavy rain on Sunday afternoon and during the night, and a very grey Monday and Tuesday. Today started nice, and got wet in the afternoon. The photo below is a screenshot from the Surin Beach Webcam this afternoon about 3pm with rain streaming down. 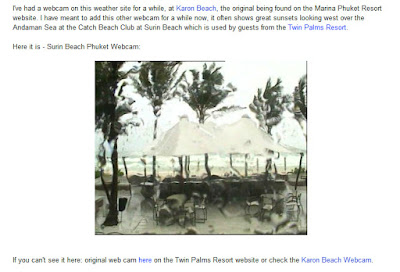 Reckon tomorrow will be a wet one too. I am hoping Friday afternoon stays dry, or late afternoon anyway - the 3rd Kathu Village Cultural Festival is on from 15th - 17th July with a big street procession planned starting about 5:30pm on the 15th (Friday). Great little festival - check the photos from last year here: Kathu Village Festival 2010.