August is low season. The average monthly rainfall in August is well over 300mm. So this week you might expect this Phuket weather blog update to be talking about rain and wind and storms, and .. what was that word? Ah, Monsoon! Well, not this week. My rain gauge is dry. Maybe a few drops somewhere on the island.. well, I did feel a few drops on Saturday afternoon, and I do mean literally a few drops. The last week has seen blue skies, light winds, not low season weather at all.

I have pinched the photo below from the Rawai Beach Facebook Page. The photo was taken today (Monday 8th August). 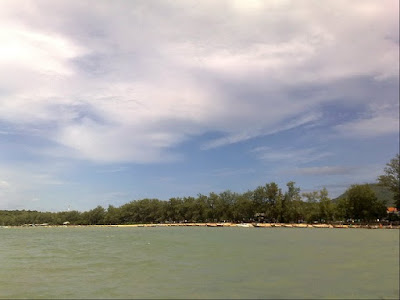 I was not able to get out today, working hard at the dive shop until nearly 7pm. But I did manage to get away earlier on a couple of days last week. The sunset at this time of year is about 6:45pm, but the days are already getting shorter! By the end of August, sunset is 6:35pm. The earliest sunset is just after 6pm in the middle of November. I took advantage of the later sunset to take a couple of drives to Naiharn Beach. One evening I went to the wind turbine viewpoint near Naiharn beach. Someone was paragliding there: The view is great, one of so many nice views in Phuket: The next day, I headed the same way but stopped at Naiharn Temple. I am trying to blog all Phuket temples, but somehow had never been to the Buddhist temple at Naiharn. And my luck was in. As the sun bathed the hills with an orange glow, monks were praying in the temple. Is this weather going to continue a while longer? I think so, but surely some bad weather has to come sometime or we'll be complaining about a drought soon! I keep saying it! Low season is not so low. You might be unlucky, but you are more likely to be lucky! And hotel prices are certainly low in low season. See you in Phuket :)