Well, we're well into September now, which is often quoted as the wettest month in Phuket (although the averages that I have show October to be wetter) and sure we've had some rain. The last couple of updates on this blog are the same - some sun, some rain, very hit and miss weather (see updates from September 13th and 6th). There has certainly been nice weather, but you find at this time of year that things get very unsettled. This is normal for September. One day sunny, then next day you wake up to grey clouds. Or take today for example - looked a bit grim first thing in the morning. I Tweeted "looks like today will be less than lovely. Grey skies and quite breezy too", but then a little later it was sunny, and then mid afternoon, the rain was bucketing down - been raining most of the afternoon and evening actually. So tomorrow will probably be lovely!

Got lazy with my camera after taking nice photos on Tuesday last week... actually busy at work - a lot of the customers for our dive shop book online, so this time of year, a month or two before start of high season is busy, plus there are updates to make, I added a new boat onto the website... so here's another photo from last Tuesday.. this guy had come down to the water to enjoy the view, same as me. The varying weather this week is demonstrated by what I write on Twitter - please do Follow me on Twitter for Phuket related news and blog updates.

September 15th : I can see black clouds and blue skies from my window...going to be another mixed bag today!

September 16th: Friday morning and looking like a sunny day in store here in Phuket. Some cloud around, but it's gonna be a nice day.

September 17th: I know that a hot day in Phuket is not news, but I tell you today is HOT!

Saturday 17th was a day off - and we were happy that one of our favourite restaurants was opening again after a few months low season hiatus. "The Beach Bar" at Cape Panwa is a small simple place right on the beach. We went late afternoon and despite some evening cloud we had a kind of sunset.. looking towards the Big Buddha. 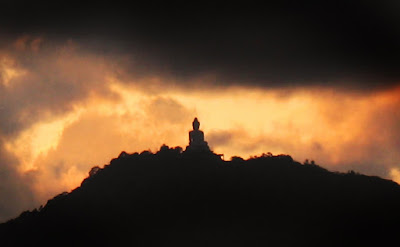 Now of course I don't mind answering questions, but if the question is something along the lines of "what will the weather be like from September 24th - 29th, or October 3rd - 10th, or October 18th - 25th?" - answer is "Partly Sunny" with a little bit of "Partly Cloudy" and some rain. And then (on average) as we move to November and December there is less rain. I am not saying it won't rain in December, since the weather is not controlled and regulated. December 2010 was wetter than August 2010, even though "on average" August is much wetter. So, as I keep saying, don't worry too much about the weather. Ah now I can't resist it, gotta post some Bob Marley videos...