Very Wet and then Very Sunny!

Starting with the good news. In my opinion, low season is finished. There is no more rain in the sky, it's all down here on earth. The last 3 days have been hot and sunny with no rain, and the winds have stopped too. Pretty much perfect weather. Also, please note, THERE ARE NO FLOODS IN PHUKET or anywhere near here. There is major flooding north of Bangkok especially around Ayutthaya, Pathum Thani and other central provinces. Bangkok seems to be OK, though a flood threat remains. The sun is out in Bangkok too now. For regular weather updates, follow me on Twitter or check one of the webcams - see links on the left of this page.

OK, so the weather now is great.. and now for a summary of the previous week, which was not so great! Last update on this blog was the 8th October, when I said "bloody raining again! But not too much and we're heading out to lunch soon". And we did head out for lunch.. drove into heavy rain, so just kept heading north hoping for a break in the clouds. Decided to check out a restaurant called Kin Dee which had been recommended. It's way up in the north of Phuket near the police checkpoint. And it's nice - a bit expensive for us, but what the hell, we're on holiday! And the rain did stop for a while, as it always does - don't let rain stop you heading out to explore, it can't rain everywhere at the same time! On Sunday 9th the weather was much better. We lunched at Kruvit floating restaurant at Coconut island close to Laem Hin - holiday was a good time for trying new restaurants which will all be blogged on Jamie's Phuket sometime in the next weeks. The whole family enjoyed the little longtail boat ride over to the restaurant. We'll go there again sometime soon. Monday 10th started very nice actually, and I was cursing being back at work! The rest of the family went for lunch at The Beach Bar. Look how nice it was! And just when you thought the weather was getting better... It hammered down later on Monday and then Tuesday was incredibly wet. My home rain gauge recorded nearly 200mm of rain (8 inches) in about 36 hours! Still, only minor floods on a few roads in Phuket, nothing serious. Mum took this picture on the 11th near Phuket Town: 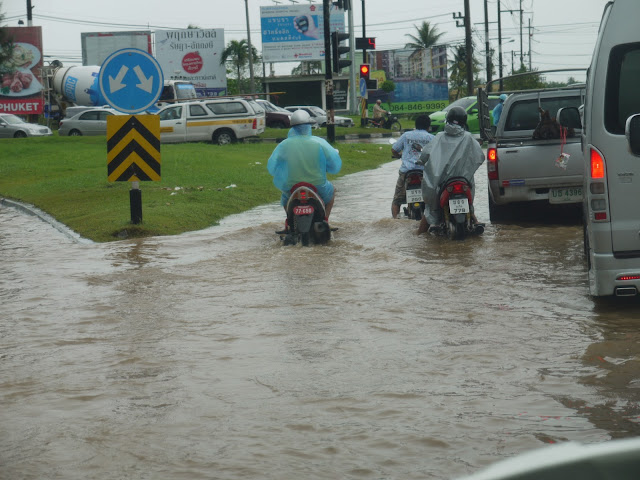 Wednesday - very changeable weather. The last spits of the rainy season? Anyway, quite a bit of rain, but with bursts of sunshine. I took a drive with Mum and Dad to Rawai beach and Yanui beach. Here's the folks at Rawai, we took a walk through the fishing village... We could see black clouds to the west but the rain mostly missed us. We drove over to Yanui beach which I had not stopped at for a long time. Will go back again soon. Nice place. There's one small restaurant and we had a drink while the rain poured. Weather changed fast, the wind was still blowing strong on Wednesday. Nice and sunny in the photo below but the rain was hammering down 30 minutes later! And now? It's all sunny, the weather does seem to be changing to "high season" mode. This does not mean 24 hour sun and no rain - you DO get rain in high season, but my feeling is that it's been so wet recently that we are surely in for a spell of very very nice weather now. I might even be tempted to go diving next week!

Very Wet and then Very Sunny!  |  The Phuket Weather Blog