A quick summary of recent weather.... Between 10th July and 15th August 2012, I recorded a total of 6mm of rainfall at our house (in Kathu, a few km from Phuket Town). Basically for about 6 weeks we had hot, hot weather. Not at all usual for the low season, "rainy season" or whatever you wish to call this time of year. If you were here during that 6 weeks, well played! Cheap hotel rates (see Agoda for hotels) and weather better than high season! It couldn't last forever of course, some rain had to fall...

The last update on the Phuket weather blog was 15th August. Well on the 16th it was cloudy and there was some rain in the night, hardly any on my house, but certainly some in Patong, which may have contributed (by causing an electrical short) to a tragic early morning (after closing time) fire at the Tiger Disco, in which 4 people died.

Then it started getting wetter ... night of the 17th I got the first real rain on my house for 6 weeks, with 29mm being measured by my faithful rain gauge. The morning of the 18th was rather grey, looked like more rain coming, but things brightened, which was good, as I wanted to get out and take photos in Phuket Town. I wandered up Yaowarat Road, and found several big old houses ... And then had lunch at Abduls Roti Shop on Thalang Road. The rain fell again (not much) on Saturday night, enough to bring the frogs out, chanting their beautiful melodies outside the bedroom window. The changing weather may have helped my son to get a bit of a fever on Saturday.. and now this week I've got a bit of a cold too. On Sunday we did not do much, though it was a pretty sunny day I did not want to take fever boy out. Late breakfast in the food court at the Central Festival mall, and we did take a drive later in the afternoon, I'd seen a hill on Google Earth, just north of the airport. On top is this ... It's the Phuket weather radar! I've never been up this hill before. Views were OK, though the hill is covered in trees. Would need to climb up the radar tower to get a better view (I didn't). Monday 20th was largely sunny, but then overnight there was a big downpour. I measured 86mm, most of which fell overnight and surely helped a bus to flip over on the main road to the airport in the wee hours. It was quite a wet day at Karon Beach too, though at my house in Kathu it had been quite dry. Rain can be very localised.

OK, saving the best for last! Well, last night was wet. Really wet. It rained all night. I was shocked by the reading on my rain gauge for the period from 7am 21st - 7am 22nd August, a total of 210mm of rain! That's more than I can remember in a single day** and I figured there would surely be some flooded roads somewhere. Surprised that my 20km drive to Karon Beach was flood-free, but I soon heard about wet roads in Phuket Town and Patong and some flight delays at the airport. Nothing real serious. I don't like to say "floods" as people tend to overreact. There was water on some roads, it slowed transport, made some houses and shops wet, but it never lasts long. Mostly all drained away during the day.

Photos below from The Phuket News. First one on Dibuk Road in Phuket Town this morning. My wife drove on that road at 5pm and there was no water. So it drains off fast, looks dramatic, but in reality, the locals just take it with a pinch of salt. 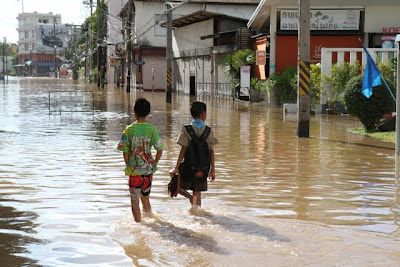 Local life just carries on as normal, this happens every year, nothing to worry about.. here's a motorbike taxi in Phuket Town... 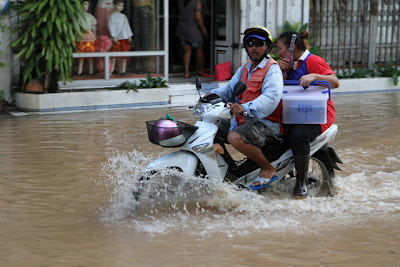 And the same piece of road that had a sinkhole problem last year collapsed again on the edge of Patong Hill (the road leading over to Phuket Town and Kathu). Guess they'll fill it in with gravel again. 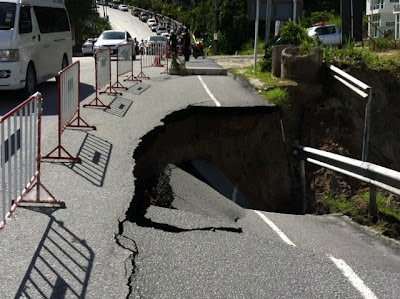 Hey, nothing too serious, and I think all gone now. In fact, today was mostly sunny, a nice warm day. Water drains off Phuket quickly into the sea. Let's see what happens the rest of this week ... Must be some more rain to come.

** Looking back through old rainfall data. October 9th 2004, over 300mm was recorded - not by me, but by the guy I got the rain gauge from. So yesterday/last night was not the wettest day I have ever seen. In 2004 I was doing some weather updates on our dive shop page, and at that time I wrote "Really wet day. Heavy rain and minor flooding in some areas. Where's my ark?".