Hot and Sunny Again (with a chance of thunder)

As I updated the Phuket weather blog last Wednesday (29th August) we were just coming to the end of another wet spell. Very wet. August was bizarre. No rain at all for the first 15 days, and then 600mm in the next 2 weeks! The wet days stopped suddenly on the 29th and we've not had any rain since then. The 29th started bright and sunny. My cat was very happy to be able to laze in the morning sun. I was actually at home with .. I don't know what kind of sickness, and I still have it .. a sore throat that won't go away no matter how much beer tea with honey I drink. So on that lovely sunny day, the first for ages, I was stuck at home. But Kaye posted a very nice sunset photo at Surin Beach on Twitter (follow her @KayeZumbaModel) : 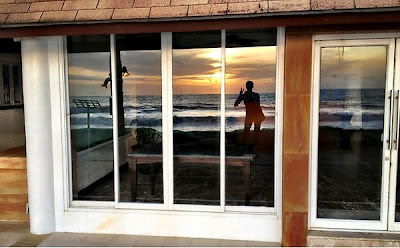 August 30th - I drove the 20km to work, but after about half an hour after opening, the electricity went off and people around our shop confirmed that it would be off all day for essential work. So .. home again to answer emails. In the evening, we were in Phuket Town, at Sapan Hin park where we got some snacks and drinks. The moon was rising to the east. Lovely evening. And a couple of guys were flying around on motorised parachutes. Sapan Hin is a nice place in the early evening, very popular with locals.

Friday August 31st was another sunny day, and so was Saturday 1st September. I had a quick walk in Phuket Town taking photos on small side streets... And then in the evening we were back at Sapan Hin with friends. There was a little local fair going on, with a stage set up, a beer tent, lots of food available... and the entertainment included our kids - son and friends below. Our daughter sang 'Price Tag' later too. A few jugs of draught beer Chang went down very well. As I write this in the evening 4th September, dark clouds are gathering, so we might get a little thunderstorm soon, would be the first rain on our house since 28th August. Some more dry evenings would be nice. The Por Tor Festival is now on, continues until next weekend. I was in Phuket Town again on Sunday evening to see what was happening at the main market. Quite a lot! I want to go again later this week. It's a very interesting little festival.

Right, must be off now... the son is heading to his Taekwondo lesson ....