As usual the Phuket weather makes a mockery of my blog. The last update on May 13th said "low Season is just about here" - we'd had a fair amount of rain in the few days after I got back to Phuket from holidays and the wind had switched to the west, a sure sign of low season. I was waiting for the first "big storm" of the season (often happens at the start of low season, 3 - 4 days of really shit weather as the west winds bring rain across the Indian Ocean) .. but it never came. A quick look back at my Tweets and photos from last week will show what the weather was like.

Tweet from May 14th "Beautiful morning. Sunny, no wind .. reports of the arrival of low season in Phuket appear to be premature." - you see, as soon as I updated the blog with rainy stories, the weather changed! Can't trust the weather. Sneaky.

(above) Sky over Karon beach on 14th May

May 15th was a mixed bag - Tweet 1 "Some rain during the night (I did not notice) and woke up to a power cut." and then a later Tweet "After a lovely sunny morning, we're getting some afternoon rain here now at Karon beach", and then in the evening "Plenty rain falling at my house (Near Phuket Town) right now. I like wet nights, clears the air nicely. Just hope the power stays on ..." - more like a low season day!

May 16th "it's a lovely sunny low season morning in Phuket .. I guess the low season has not really started yet."

May 17th, more sun! And a day off work for me. We drove into Phuket Town for lunch at Dairy Hut, one of our regular favourites. It was a hot day and here's a view from the car on the way to town ... 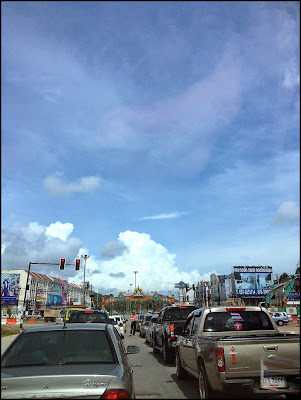 Blue skies and traffic. So many vehicles on the roads these days. And on a sunny, hot Saturday it seems half of Phuket heads to the malls to cool off in the aircon! Traffic has got a lot heavier in the last 10 years, noticeably in the last 5 years. Lots of roads are being fixed/widened, new cut-through roads have been built to ease the traffic at main junctions and 2 huge underpasses are being built too. Phuket has a lot of quiet places, but sometimes to get to these quiet places takes time!

Later on the 17th I was in town again, meeting up at Chinpracha House for the Phuket Instagram meet-up, part of the 9th annual Worldwide Instameet. I had no idea Instagram had existed for 9 years - I only got a smartphone last year. Was nice to meet some people, had a good afternoon, and I have written about it on the blog : Phuket Instagram Meet. 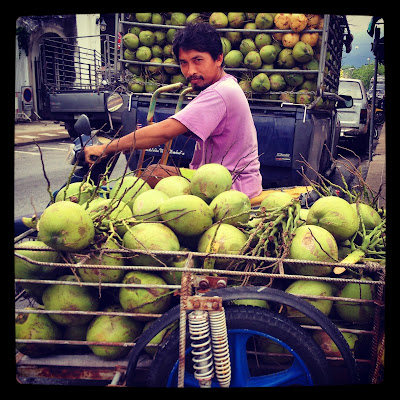 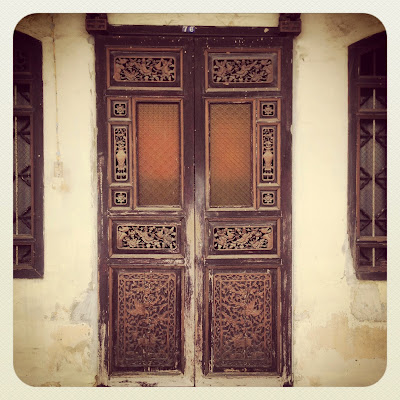 (above) A couple of my Instagram photos taken in Phuket Town on May 17th.

May 17th in the night there was some heavy rain for a while as I was watching the FA Cup Final in TV, and May 18th the morning started drizzly, so it was a perfect day to take the kids to the cinema and watch Godzilla! The cinema at the Central Festival mall is very good. Weekend ticket price 210 Baht. We enjoyed Godzilla!

May 20th - woke up to the news that we are now under martial law and the army has taken over ... peacefully, just like in 2006, although this time they swear it's not a coup, just an attempt to get all parties talking and try to sort Thailand out. Please do. There is no reason to be concerned if you are visiting Phuket. Everything is 100% normal.

May 20th weather Tweet "Lovely sunny day with flat seas ... so I guess low season is not quite here yet!"

And yesterday (May 21st) was the same, and I have woken up this morning to more blue skies! See you in Phuket! Although the weather is mixed, I think low season can be a great time to visit. The weather is often nice, and hotel prices are way lower (have a look at Agoda.com for hotels).

I'll end this post with a photo taken by a friend called Mona, she is currently GM of a newly opened hotel near Naiharn beach called Naya Paradise Retreat. This is the sunset on May 20th at Kata Beach. Nice. 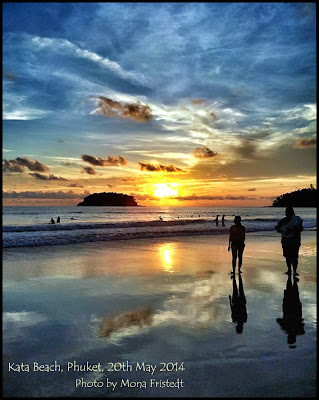