So, June is nearly done .... the last update was on June 10th and I was saying that the real low season weather had not really hit. Only a few grey, wet days, but lots of sun. If you visit Phuket in the low season you have to expect some bad weather, but people often get lucky. You're more likely to be lucky than unlucky. The really wet and windy days are few and far between, but of often happens, we got quite a few crappy days right after I last updated the Phuket weather blog :) Here's a summary of the last couple of weeks...

June 10th (evening), a Tweet said "It's a warm, windless night here in Phuket, but the forecast does seem to be getting wetter and windier as from tomorrow #calmbeforethestorm"

This turned out to be correct...

June 11th "Mostly blue skies, some dark clouds and a few spots of rain this morning"

June 12th "It's a grey, wet morning in Phuket ... Some strong breezes blowing too."

By the 12th, it was looking rough at the beaches and the red flags were flying. The red flags mean "No Swimming". If you see big waves, don't swim. It's not just the waves, but there can also be rip currents.

A photo on the 12th on Instagram. At Karon beach this morning .. Rough seas, dark skies and please don't swim... 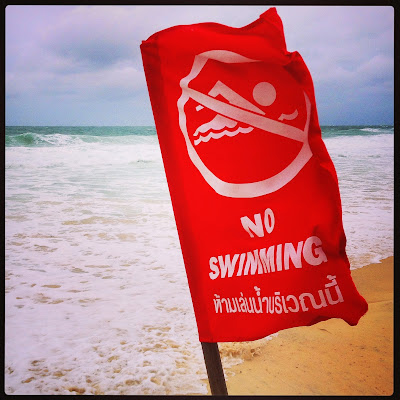 June 13th "a windy night, big waves at Karon beach again this morning, but the sun is out :)"

DON'T GO SWIMMING IF THERE ARE BIG WAVES

June 14th - mostly sunny, but still rough at the beaches ... 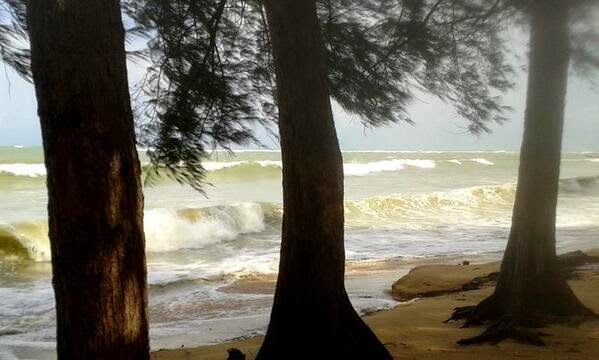 (above) at Nai Yang beach, June 14th, photo by @Phuket_Bukit on Twitter.

June 16th, a Tweet that shows the changes in daily weather in low season "Phuket weather report .. yesterday was ****ing hot, last night a bit wet and this morning grey and hazy."

June 17th "Weather this morning - it's sunny and the wind has died down. Looks like a lovely day ahead." 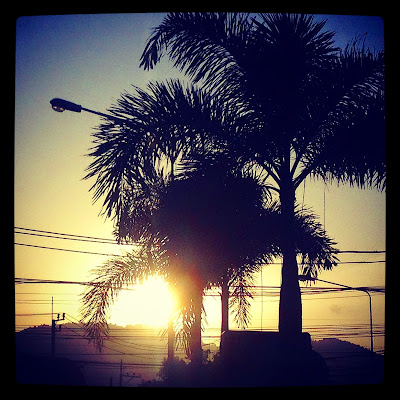 (above) Sunset, June 17th - taken through the windscreen of our car, at traffic lights on the way home - even a nice sunset at the traffic lights in Phuket :)

June 18th. Oh and the World Cup started a few days ago. As an Englishman, I decided wisely to ignore it and not wake up in the small hours of the morning to watch my country.

Above, at Bang Wad Reservoir on the 18th .. I often go here for morning exercise.

June 19th (below) I was at the reservoir again. Check out these lovely sunny low season mornings :)

I had a day off and went into Phuket Town in the afternoon, dropping the kids off for art class. We visited the Phuket Indy Market, parking near the dragon statue (below). 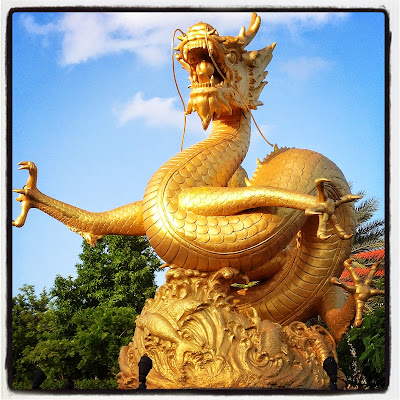 (above) The Phuket Dragon on Thalang Road at the Queen Sirikit Park, June 20th

June 21st "Waking up to the sound of rain ... Yesterday was hot and sunny. Never know what you're gonna get in low season :)"

June 22nd - another day off :) Well, in the afternoon my wife took our daughter to the dentist and I took our boy to Phuket Town to check out the Baba Wedding street parade. Had a drink first at Eleven Two and Co., then wandered up Thalang Road where the weekly Sunday Walking Street market was taking place. 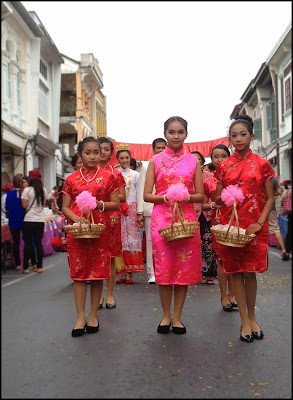 (above) on Thalang Road, June 22nd

And then my boy and I watched the football! Not the World Cup - we watched Phuket FC take on Saraburi at the Surakul stadium in Phuket. We've been a few time before, but not for a couple of years. And we chose an entertaining game, with Phuket ending up losing 4-5 :(

June 23rd "Grey start to the day, but dry for my morning 6.5km walk - a heavy downpour with lots of wind followed a bit later. Now just grey again."

June 24th "Quick morning weather report from Phuket : sunny" - it changes every day sometimes. You never know what you'll get until you wake up :) 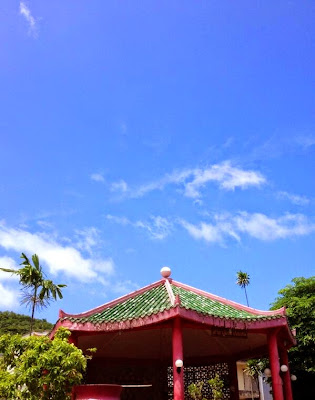 June 25th - another lovely sunny day, but with big waves at the beaches. 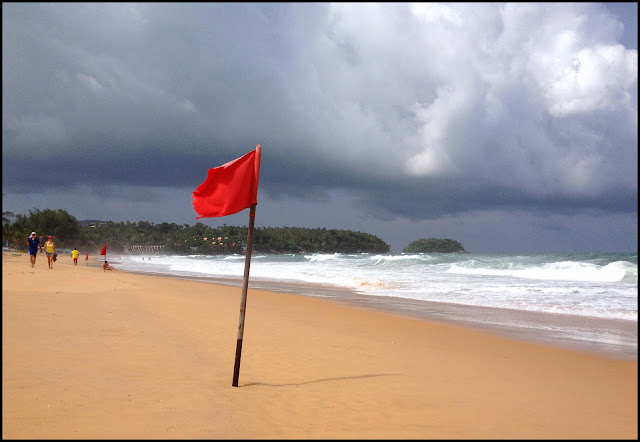 And looking the other way... 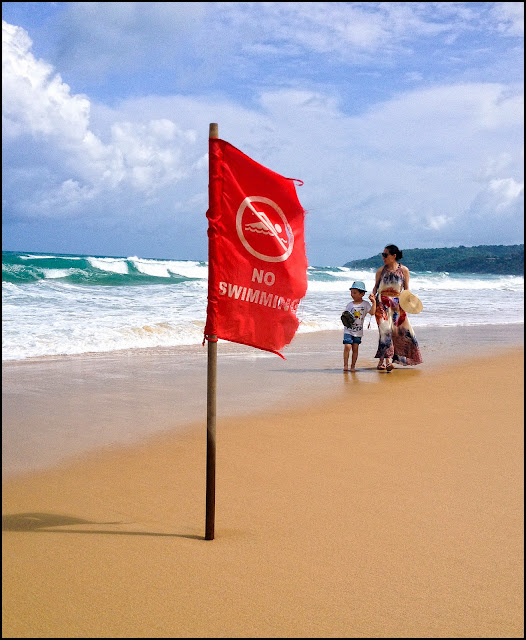 Them big waves .. by all means take a walk on the beach, or catch some rays, but don't swim.

June 26th (today!) - another mostly sunny day with big waves! Like it or not ... we need more rain here.

In the afternoon I was at Karon Beach as I'd seen in the Phuket Gazette that Dr Robert Brander of the University of NSW would be giving a talk about rip currents. Well, at least a few people showed up. The Phuket Gazette had a video camera rolling so I hope to see a report online soon. 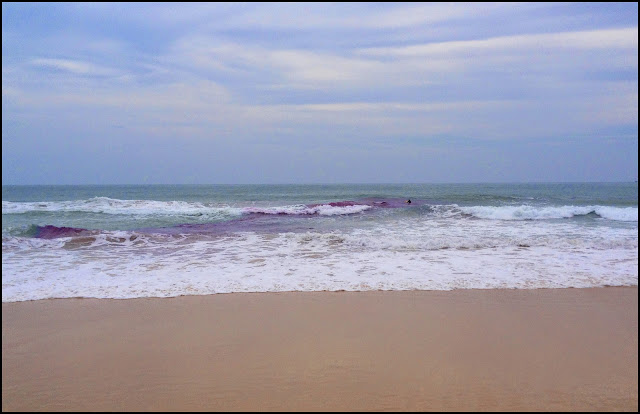 (above) At Karon beach this afternoon. Purple dye (actually potassium permanganate) added to the surf zone shows the location of the rip current.

Forecast : Who knows! Low season weather in Phuket is random. I see that 2014 could be an El Niño year, so weather patterns could be abnormal. If you're coming, enjoy! See you in Phuket!