Well, the last update on the Phuket weather blog was on August 24th, one day before my Mother's 70th birthday. Having been in England for 3 weeks already in July and August, I headed back again on the night of August 26th knowing that Mum was not going to be around much longer. This is a weather blog, so I won't dwell on the details, but Mum died on the night of August 28th. Cancer finally got her at the 4th attempt more than 20 years after she was within death's reach when cancer struck the first time. We didn't think she'd live to be 50. But she made 70. That's 20 years of fight. I gotta say I was not paying much attention to the Phuket weather news while I was in England. I heard something about rain and I guess some days were nice too. And while I was "back home" (although I feel very conflicted now about the definition of "home"), the weather was mostly very nice, a little cold for my taste, and some days with English style drizzle, but at least the day of the funeral was a perfect sunny day.

And now if you don't mind, a few photos of my Mum (and Dad) enjoying Thailand. My parents came over here many times. First time in 2002, and the last time in 2013. 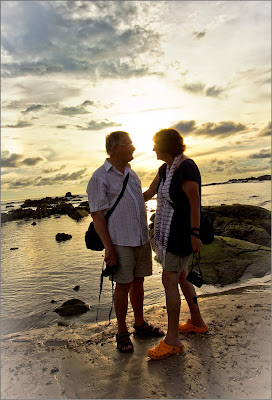 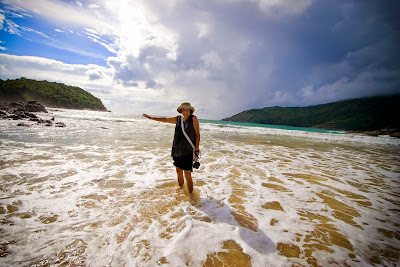 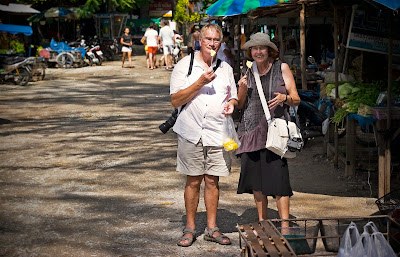 Sadly, my Dad will not be coming again either. He was OK last year, but he has had a rapid onset of dementia. And unbelievably, just a few days after Mum passed away, Dad managed to fall over at his care home and break his hip. He's still in the hospital now. Oh, and let's add one more layer - a couple of days before Mum died, an uncle of mine died. And although it was unplanned, his funeral was at the same location with 45 minutes between his and Mum's funeral. So despite the sadness, it was a huge gathering of family and friends. In the sun. In England.

So, I have no weather news from August 27th to September 11th. I got back to Phuket last Thursday night, the runway was wet, but it was not actually raining. Weather was OK on the 12th, but rather wet for most of Saturday 13th. On a wet morning, what do we do? Head to the Central Festival mall! We had lunch there on Sunday, visited the bank and did some light shopping. I then slept half the afternoon catching up with the flight, having been to work all day on Friday. On Saturday evening, the weather looked just about OK for a visit to The Beach Bar at Cape Panwa, just opened after the low season. They normally wait until October and might be wishing they had! We were the only ones eating dinner, although one guy stopped for a beer. There was no sunset for lovely photos and a light rain did start to fall as we were finishing our meal. 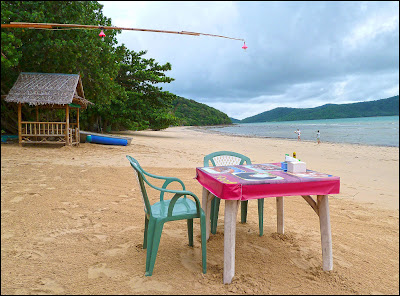 (above) At the Beach Bar, 13th September

And the last 2 days have been mostly wet and windy. Really windy at times, knocked over a few trees, like this one I saw in the Phuket Gazette... 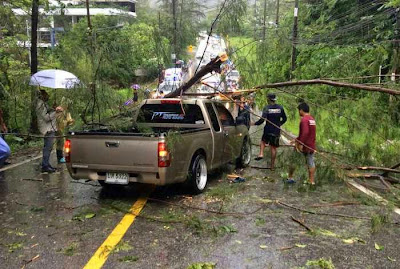 Nobody hurt thankfully. My garden is a bit of a mess too. And I know lots of tours like boat trips and diving have been cancelled the last 2 days.

The forecast says that tomorrow will be wet and windy too and then things get better for a while. I doubt this is the end of the low season, it's a bit too early for that. I imagine more wet weather will come during the vegetarian festival which starts on the 23rd.

Next weather blog update will be a little more detailed.

A reminder that you can always see what the weather is like in Phuket by checking these live webcams ...

Or use any of the links on the left of the page for weather information.