I posted a little review of the high season weather a couple of weeks ago (see Phuket High Season 2014 - 2015 Review). We have had a lot of hot weather and not much rain until recently. We'd had a little break from 2 - 11 May in Chumphon on the east coast of Thailand. And then, back to normal life - work at the dive shop for me and back to school for the kids. Now we're just about into June and we just had another little 3 day trip to Chumphon (came back yesterday) as the kids had Monday off school due to a Buddhist holiday. Now it's back to the grind!

Has the low season really started? Well we have finally had some proper rain, but the west / southwest monsoon winds have not really started yet and, for me, that is the sign that the real low season has begun. The Windguru forecast still shows only light winds for the next week.

A look back at the weather since we got back to Phuket on May 11th. Regular weather updates, please follow me on Twitter!

First a quick mention of earthquakes .. there were several small tremors (from 2.5 - 4 on the Richter scale) in the Phuket / Krabi area during the 10 days we were not here. I was rather miffed to miss them all!

Weather when we got back from Chumphon was just like on the east coast - hot, humid, a few rumbles of thunder, a few drips of rain in places.

(above) Jungly and slightly damp view from our lunchtime table at Pak Nam Seafood, 13th May.

May 14th we had some overnight rain, but the day was sunny and very hot. Ask my cats .. they crashed out in the shade. 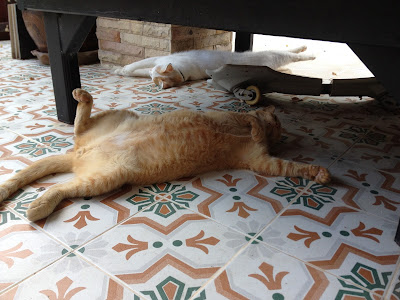 May 15th, I Tweeted "Today's weather in Phuket ... hot with dark clouds around. Not rained on me yet, but for sure there's rain around"

After the kids finished school we took a walk at Sapan Hin park in the south of Phuket Town. The light winds were perfect for kite-flying. 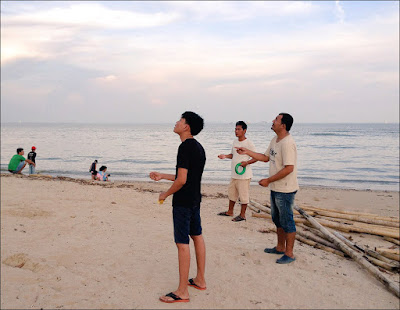 May 16th - another lovely sunny day, there were thundery looking clouds around, maybe some areas of Phuket saw some rain. Did not rain on us!

May 17th - more of the same, but this was the first day I noticed any kind of westerly wind. I took a little (and rather dull) timelapse showing clouds moving across our garden.

Later we drove down to Cape Panwa. One of my favourite roads ... 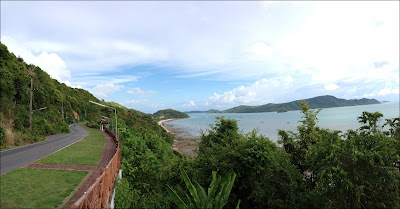 May 18th .. well, I had taken a few extra days holiday the previous week, but now back to work! And to accompany me to work, it was a grey, wet start to the day, although it got sunny later.

May 19th ... more sunshine. I Tweeted a little photo of the Chinese shrine outside our dive shop

May 20th weather Tweet of the day was "Beautiful sunny morning here in Phuket .. low season not here yet!" 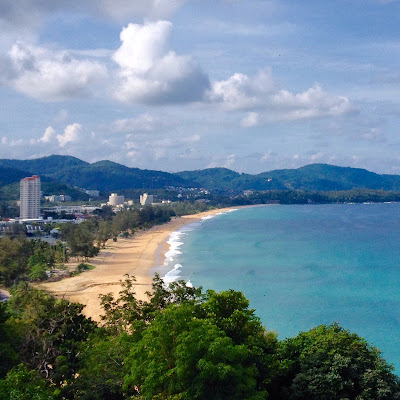 May 23rd I was in a temple mood, and wanted to update some photos on Jamie's Phuket Blog, so planned to visit 3 temples in the Thalang area of Phuket. My boy came with me ... 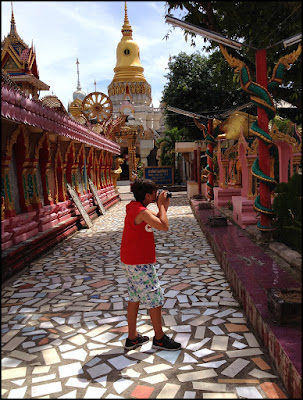 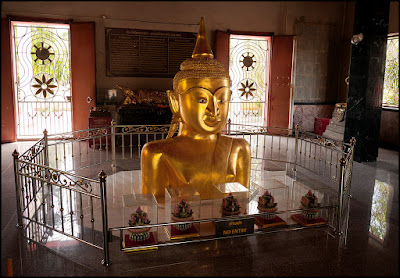 Very nice day, there was some rain around, but not much. A little rain does not spoil a day out.

May 24th I could fill a blog post with the day we had .. Started very nice and sunny and we drove north into Phang Nga Province. No real aim, just taking a drive, finding noodles for breakfast and then trying to find our way to a place called Phu Ta Jor, a viewpoint in the hills, but as it turned out after much searching .. you need a 4WD vehicle to get up there. Anyway, nice scenery! 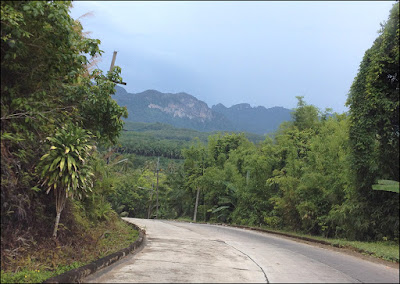 (above) Scenery in Phang Nga, May 24th

But on the way home, the rain poured down! Most rain I have seen for months. 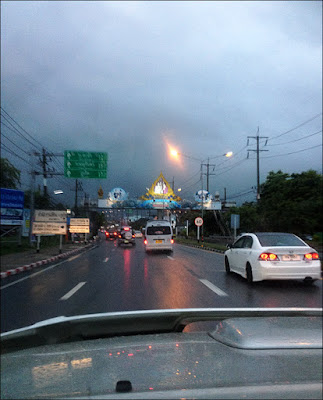 (above) Driving in Phuket, 24th May about 6pm. Dark skies and lots of rain.

May 25th started grey and cool after all the rain we had (it continued in the night of the 24th). I'd say the 25th was fairly typical for a low season day. I Tweeted that the afternoon was quite nice and then an hour later the rain was lashing down! You get days like this .. some sun, some rain. Don't let the rain put you off!

May 26th was a wetter day, especially later in the day. A Tweet says "Getting dark outside, but it's only 4:30"

May 27th started with this Tweet "It's p*ssing down again this morning. Low season has begun in earnest."

But it seems that was a false start. Often seems to me that the start of the "wet season" is like this .. a few wet days and then it gets nice again.

May 28th "Woke up to the sound of light rain, but an hour later there's plenty of blue sky. Looks like a sunny day ahead."

And (below) the main street near our dive shop on May 28th : 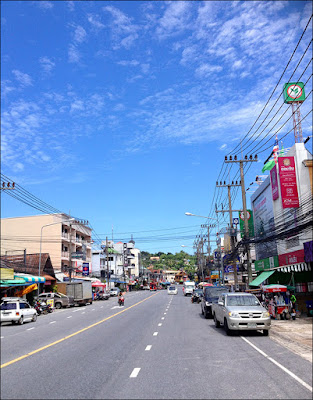 On to May 29th "Another sunny, almost windless morning in Phuket. Proper low season not started yet!" 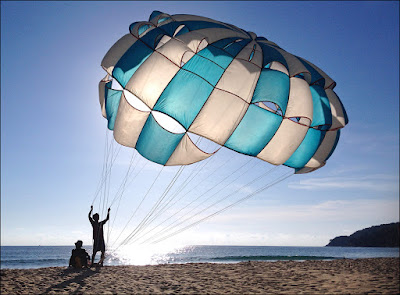 May 30th and 31st we were away, came back yesterday. Quite a bit of rain around down the west coast yesterday. We could see from our garden that we'd had rain, and today June 2nd was a wet one. Probably the wettest day of the year so far. Raining hard in the morning before I drove 20km from home to Karon beach, and then more heavy rain in the afternoon. Some small flooding on some roads, nothing serious - little floods in Phuket always drain off within a couple of hours. Roads were dry by the time I drove home at 5pm.

So, has low season really started? We have had some wet days in the last week, but still waiting for the winds to start. And I expect more of the days when, even on Twitter, it's hard to update the weather as it can change every hour!