August is with us already (it's the 5th today). The weather so far this month has been typically mixed. Every day different. If you ask me for a weather forecast any time in low season, I will say "mixed". Today was wet, yesterday was sunny, the day before wet, the day before that was sunny. Wanna guess for tomorrow? Basically, if you are here in Phuket during low season (meaning any time mid May - mid October) expect some sun, some rain, some really nice days and (sorry) some rather cr*ppy days!

Here's a quick review of July 2015 using Twitter and some photos. Please do Follow Me on Twitter (@jamiemonk) for weather news, Phuket news, idle chat .. and you can ask questions on Twitter too :) I tend to mention the weather most days.

Another lovely sky this evening pic.twitter.com/lZ31QXoqLT

The sky one way is lovely, the other way looks like rain coming. That's typical low season weather in Phuket. pic.twitter.com/EvH2yGH2g8

On Saturday July 4th, a day with no work ... and a typical low season day. Tweet says "A few minutes ago it was pissing down, now sunny with blue skies overhead. On a windy day the showers can pass very quickly!"

Not a day for a paddle ... big waves at Karon Beach (photo from the webcam http://t.co/9Vgtc9Rvo3) pic.twitter.com/RYHkMvSLFV

Not an ideal day for a day out, but we got to Phuket Town later for dinner at Kopitiam, a regular favourite.

Kopitiam is one of our favourites ... On Thalang road in the heart of old town. pic.twitter.com/wr4jhO3YdZ

View from Karon beach webcam right now http://t.co/9Vgtc9Rvo3 .. I'd suggest today is a good day to have a few beers! pic.twitter.com/W91ZMZuRRa

July 8th, after several wet days in a row (yes this can happen, bad luck if it happens to you!) things were a bit nicer, but I got some kind of stomach bug and spent most of the 8th and 9th in bed. Managed a half day at Sunrise Divers on the 10th.

Lots of rain overnight and windy too. This morning a mix of blue skies and showers.

In fact when I look back, early July was all pretty grey and wet! The 11th was a day of heavy showers and sudden sunny bursts.

Blue skies over our house now ... But we have no plans to go out ... Kids should study for tests! pic.twitter.com/T6r0q1kNu4

And the evening was good enough for a walk and snack at the old town Sunday market ...

13th however was back to grey and showery weather. July 14th also wet, plus the power was off all day in Karon, so I closed up the dive shop early and answered emails at home. Yeh, now I look at it, half of July was not the best weather! The 15th was also sunshine and showers.

Morning weather in Phuket .. brighter and less windy than the last few days. Not exactly sunny yet, and still big waves at the beach.

It's an almost sunny day ... half a day spent clearing up the garden after a week of pretty wet, windy weather.

July 17th afternoon we planned to watch the new Terminator movie, but found out it had finished the day before! So we spent the money on lunch at Wine Connection :)

No movie so we spent the money at Wine Connection instead :) pic.twitter.com/pgIIpXToWO

And then a walk at Bang Wad reservoir in Kathu ...

July 19th, despite a wet start, we headed out to do some exploring in Phang Nga to the north of Phuket :)

Plenty of clouds as we enter Phang Nga, but the weather won't stop us ... Fortune favours the brave and all that. pic.twitter.com/DkoD004JSq

We visited Bang Pat village, very popular with local tourists at weekends, and specially this weekend after Ramadan, lots of Muslims out for a big meal! 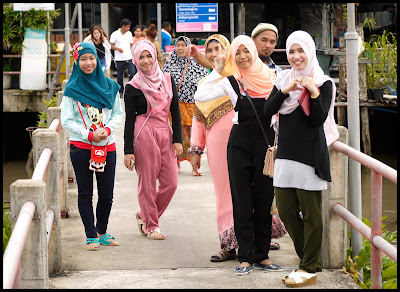 And then in the evening, me and the boy went to watch Phuket FC v Songkhla ...

No cans or bottles allowed in the stadium so it's Leo beer in a plastic glass with ice and a straw! pic.twitter.com/DncNrHsiRm

July 20th, another somewhat grey day with some rain, the 21st a little nicer, no rain.

And the 22nd suddenly much, much better weather.

Now that's what I call a nice day! At Karon beach, which had seen big waves the week before, it was like high season.

We got this on Saturday morning (25th) :

Where'd the sun go? Just popped out for a few errands ... pic.twitter.com/HrgVw5Q8DP

Yes it had started sunny, but then the rain really came down hard for an hour.

But things got a lot better so we could take the kids to Phuket Wake Park for a couple of hours. 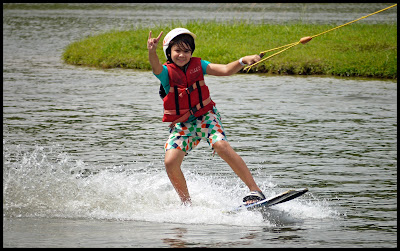 July 26th another sunny day with some showers.

Phuket weather - looks like a sunny Monday, but like the last 2 days, don't be surprised if some thunder arrives later.

After a few rumbles of thunder, it's turned into a lovely sunny morning. If you are in Phuket, get up and get out!

Good morning from Phuket ... 7:30am and sunny. Can't promise it'll last all day, this is low season, but the last week has been pretty nice.

July 30th was the start of the 3 day Kathu village street culture festival - lots of colour and local food. We just missed the main parade, but I found some of the participants on the street later ...

At the Kathu village festival in Phuket this evening. It's on for 2 more days. pic.twitter.com/hnKeux0n3K

And on July 31st we drove off Phuket up to Chumphon about 400km north for a few days visiting my wife's family.

And that was July 2015 in Phuket! It was quite damp I suppose. But many days were very nice and much of the time the rain here is not that heavy, bring a light raincoat and a small umbrella and you can do just about anything you want, just there might not be clear blue skies. Hoping for a great August! Cheers!